Carriage 2100, named Glaslyn, is a Pullman observation carriage built for use on the Welsh Highland Railway

Before construction started, the second Pullman was originally conceived to be similar to Carriage 2115. This idea was changed to a Pullman Observation carriage to give a panoramic view at one end, with a rounded end similar to Caledonian Railway observation cars.

The welded chassis and body frame has been manufactured by a firm with a fabrication workshop near Caernarfon. The frame was delivered to Minffordd Yard on April 22nd 2008, and towed to Boston Lodge for completion.

Greenberg Glass Ltd of Bangor manufactured the special curved glass panes for the observation end, and these were delivered on August 28th 2008.

The carriage was almost complete when seen in the erecting shop at Boston Lodge in December 2008.

The interior is divided into two saloons – the observation area has moveable low-back seats, and the other saloon has high-backed seats similar to those in Carriage 2115.

The interior is decorated with marquetry panels featuring designs of ospreys. It had originally been intended to name the carriage Osprey but problems with ornithological Welsh - by some, the bird was erroneously asserted to be Eryr y Môr (sea eagle; this is in fact the white-tailed eagle [heliaetus albicilla]) and by others correctly Gwalch Pysgod (literally Fish Hawk [pandion heliaetus]) led to the decision to name the vehicle after one of the major local rivers: The Afon Glaslyn rises on Snowdon and runs down Nant Gwynant, through the Pass of Aberglaslyn and through Porthmadog to the sea. The Welsh Highland Railway crosses the river three times, at Bryn y Felin, Pont Croesor and Britannia Bridge.

Originally, it was thought that unlike the previous saloons this would be on roller bearing bogies acquired from Romania rather than the plain bearing SAR bogies used to date. The bogies (regauged from 760mm gauge) were supplied by CFI of Brad, Romania, and arrived at Minffordd in July 2007. One pair was fitted under the Pullman Carriage 2115 as a trial towards the end of the same year (it rode badly).

However, when the new carriage 2100 was unveiled it was on the plain-bearing SA type bogies. 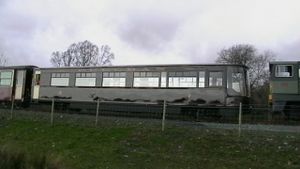 on its first ECS move from Boston Lodge to Dinas Junction seen here at, the as yet to be built, Pont Croesor Halt

The livery of 2100 was a closely guarded secret prior to its public unveiling. It was painted in the same L&Y purple-brown livery as the FR Victorian heritage carriages, lined in gold leaf with “Pullman” lettering and hand-painted coats of arms. It was unveiled at Boston Lodge on 10th March 2009.

The carriage was transferred to the operating WHR stock at Dinas as part of the first through train over the completed WHR on 12th March 09.

After a season's use, the carriage went to a tourist industry show at Olympia, London, in March 2010. Comments from astonished visitors included 'Do you have real ones like this?' and 'It's a pity they don't make them like this nowadays.' A person more used to cars inquired where were the safety belts; a manager of a well-known chain of hotels had never in his life before been inside a rail vehicle. Some standard gauge enthusiasts had difficulty in believing it is narrow gauge and had to be taken underneath to see the wheels for themselves.

On the occasion, 27th April 2010, of a Royal Visit to North Wales, Her Majesty Queen Elizabeth II travelled on the WHR in this carriage. On her arrival at Dinas, she named the carriage Glaslyn after the river that runs along much of the southern part of the WHR.

Prior to the start of the 2021 season Carriage 150 and Carriage 2100 were turned around so they could be marshalled at the Blaenau end of the sets used for that year's modified (due to Covid-19) WHR services.