Was delivered new to Dinas in September 1997. Runs on bogies imported from South Africa. Built by Winson Engineering in Daventry. The original order was for six carriages - Nos. 2020, 2040-2042, 2090 all delivered in 1997 and 2115 which followed in 1998. They were built to a price and much refurbishment has been needed to bring them to Boston Lodge standards. The basic design was to have followed that of FR No.1111, which has a steel floor-plate tack-welded to the underframe, two longitudinal steel members as a spine with the brake gear running between them and fish-bone spines from the central spine up the sides at each bay.

Unhappily, the first design modification was the removal of the steel plate, this leaving the carriages with a lack of longitudinal strength, causing hogging of the frames. In subsequent carriages, the strength of the underframe has been restored by putting horizontal diagonal trussing into the underframe, beneath the floor. This can be done to the earlier frames as they come in for major overhaul. The framing of the body is made in welded stainless steel box-girder sections, the idea being that this should survive the Welsh climate and that the entire carriage can be rebodied at the end of the life of the wooden structure.

Refurbishment carried out at Boston Lodge with paid staff and volunteers started in January 2005 and completed by the following month.

The 2005 refurbishment resulted in the new standard livery of cream doors being applied. This is a requirement of the Disabled Access Regulations to enable partially-sighted people to see the doors. However this regulation may suit smooth-sided suburban multiple-unit stock, there is room for a divergence of opinion as to whether it ruins the artistically harmonious look of a F&WHR train. Standard FR size numbers were applied. The interior views show the matchboarded ceiling and sides, with light fittings and PA speakers mounted down the centre of the carriage. Diesel-fired hot-air heating is fitted. The left bottom picture shows the up direction (toward Blaenau Ffestiniog) view, and the right bottom picture shows the down direction (toward Caernarfon). All the 2000 series third-class carriages have the double seats on the left looking in the up direction or 'clock side' side.

Over the winter of 2018/19 2040 was rebuilt to the latest standard with new top light windows, new doors and a refreshed interior.[2] 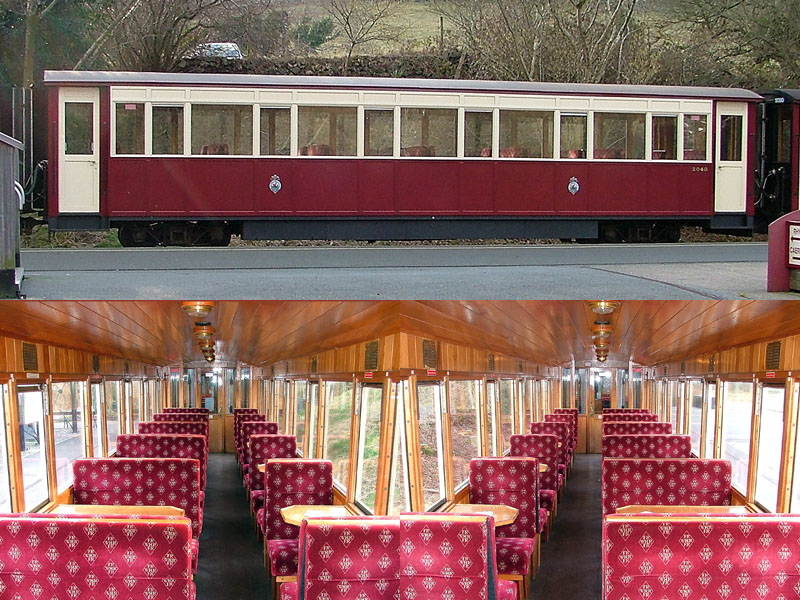 Exterior and interior views of Carriage 2040 in its pre-overhaul state.