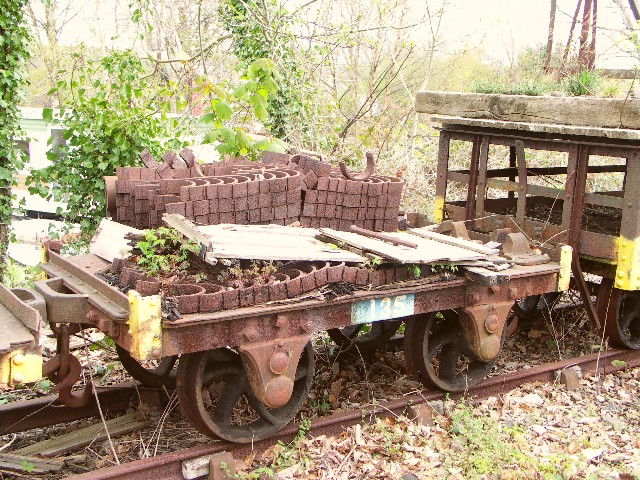 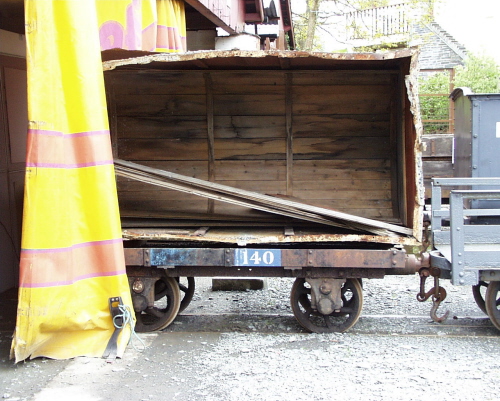 Wagon 140 - Minffordd Yard - FRTG describes this as 'Four wheel all metal flat wagon formerly 3-ton slate wagon'. The load is the body from one of the Gun Powder Waggons and came as part of the ex-Maenofferen slate wagon sale. Another view, albeit in the background appears here 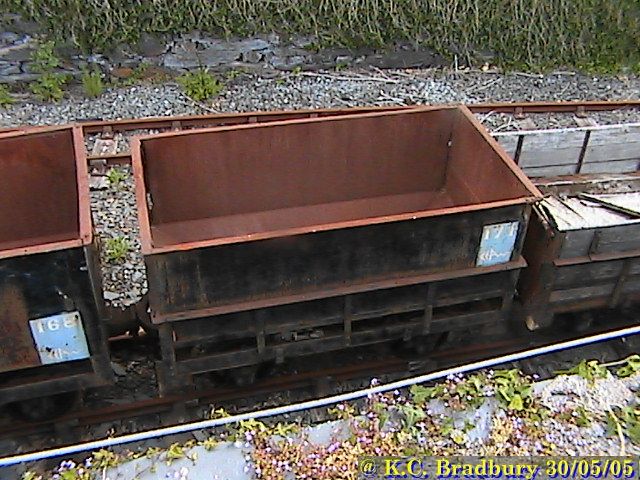 This wagon is rarely used by the FR Permanent Way gang because in recent years they have not needed to lay large amounts of ballast. It was last used in February 2009 to lay ballast on Dingle Curve and it required a lot of persuasion to get the mechanism to work due to corrosion. Consequently, the wagon is currently out of service, pending repair by Glanypwll Depot. 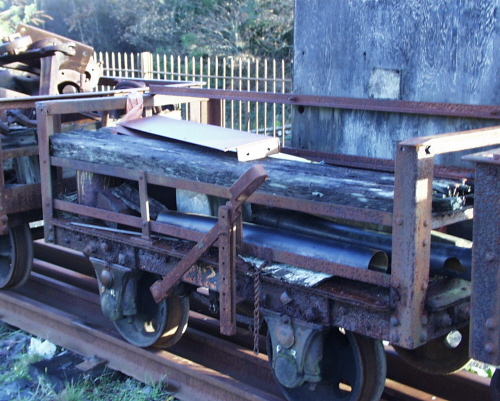 212 (S & T) Converted two-ton braked slate wagon allocated to S&T on the official list as tools wagon. It was agreed in 2001 that all heritage wagons like this one would be removed from the works fleet and be available for possible restoration. In effect it has been 'mothballed' hence there being no worry about duplicating the numbers (see restored wagon 212). It used to be numbered 707 under the old company (pre 1954) but was changed to 212 under the new company's 2xx convention (for numbering two ton slate wagons). It has been adapted by removing parts of the two sides. Built in the 1890s [Source: Marcus Ingram FR E-group posting 45081; Iain W FR E-group posting 45097] 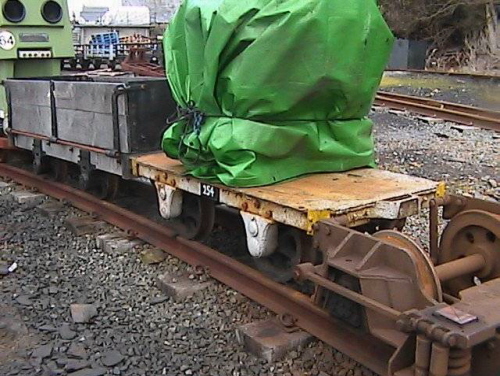 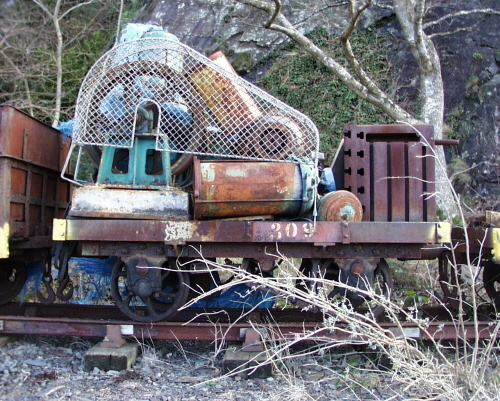 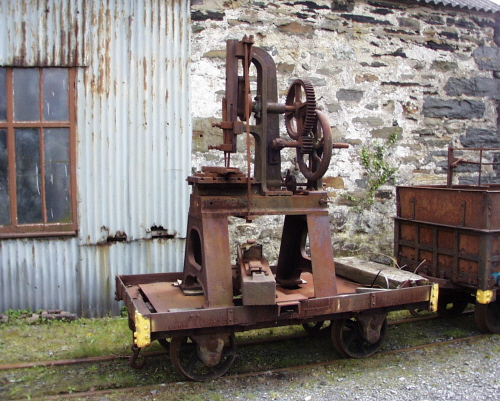 That is, indeed, what it was. However, this may not be 317 as it has been fitted with a bolster, so it is one of the wagons converted for use by the P.Way dept. It is NOT one of the original Iron bolster wagons, though the bolster itself is an original item, probably recovered from one of the derelict wooden bolster wagons. What may be confusing is the load, an historic piece of machinery saved for posterity and put upon the wagon so it is mobile, rather than cluttering up ground in Boston Lodge or Minffordd yards. The bolster can be seen between the 'feet' of the machine. 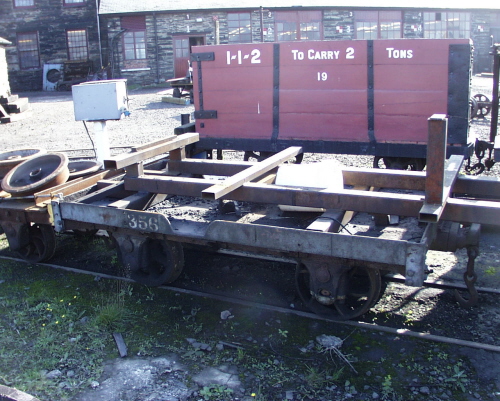 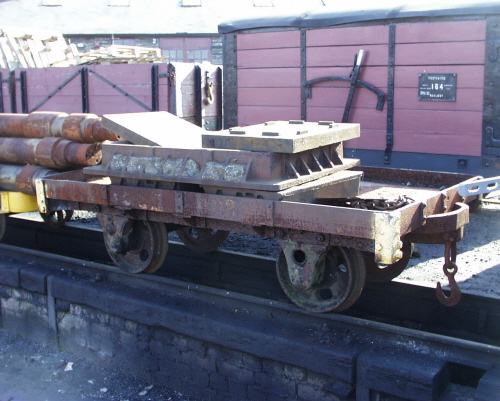 Wagon 403 - Boston Lodge. Now this IS a flat converted from a 3-ton slate. 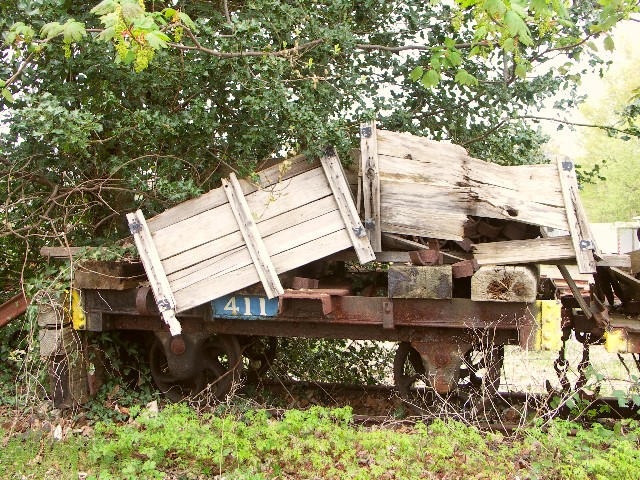 This wagon is used to hold any one of the double fairlie power bogies. Its most recent use was on the Earl Of Merioneth's top-end bogie. 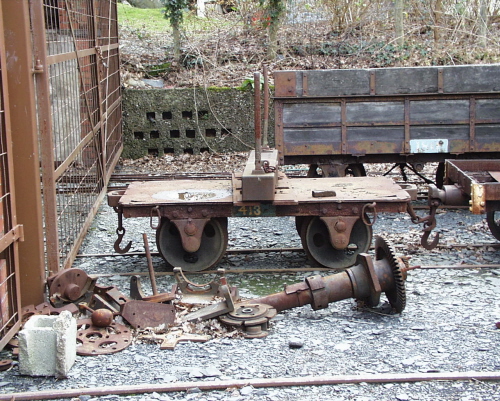 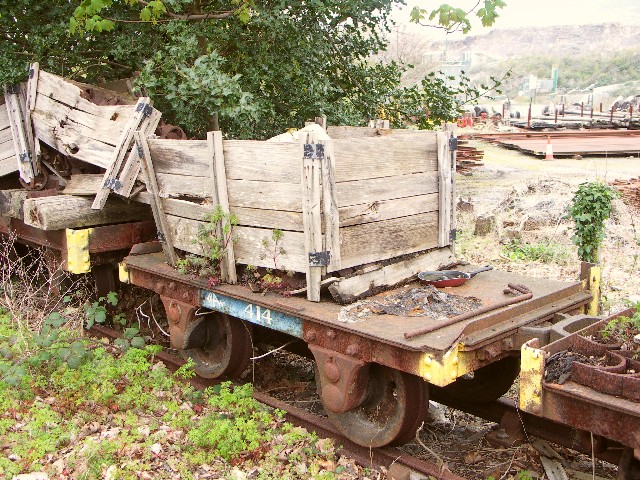 Some of the wagons illustrated above have yellow headstocks which means they have been designated restricted use vehicles and are not permitted to run on the main line without the express permission of the CME or Civil Engineering manager.