Rhosydd Quarry (transl. "Moors Quarry"): Situated at up to 1800ft. above sea-level on the col north-east of Moelwyn Mawr, away from all public roads, near but never connected to the Cwmorthin Quarry that fed to the Festiniog Railway at Tanygrisiau, the remote location first saw serious quarrying in 1852. In the manner typical of the Blaenau Ffestiniog area, it developed by means of underground chambers, connected by subterranean inclines, with slate reaching the surface of the sloping mountainside along the adit (drainage) tunnels, and where, in the slate mills, it was cut and split into finished roofing slates of various sizes. There were "barracks" on site for the quarrymen to live during the week.

Transport: Relying early on on pack animals to reach first the Dwyryd estuary and later the FR Co. at Tanygrisiau (jealous Cwmorthin would not allow use of their tramways), from 1864 output went down the newly-built horse-worked Croesor Tramway to Portmadoc harbour and later the Cambrian Railway. Exit from the quarry was down the most precipitous slate incline in North Wales, falling 671ft. vertically over 1250ft. horizontally, but on the J-sided valley, its top was steeper than 1:1 and usually only a single wagon could be lowered at a time, balanced by an ascending empty.

Wagons: In the 1860s wagons were bought ready-made, but later were built at the quarry. In 1928 the Company owned 54 (hence the conjectural number on this wagon) but only 30 were usable and Boston Lodge Works rebuilt some. They weighed about 12 cwt. and carried about 2 tons of finished slates. Certainly, this restored example has much that is identical with traditional FR Co. wooden slate wagons (eg. identical bodyside "bobbin" spacers,) but some puzzling differences, too. Why is there an iron plate across the body end tops? Might it add strength when on the steepest part of the main incline? Why is the lower end bar thicker than the others, necessitating spacers below the lower mid-bobbins?

Restoration: Initially rescued from beside the main incline (where many wagons had come to grief) by the FR Co.'s "Reynolds Gang", perhaps in the 1980s.

Restoration was restarted in 1999 from nothing more than most of the ironwork and newly-made longitudinal chassis timbers. Only the drawing shown was available as guidance, no helpful photographs being known. 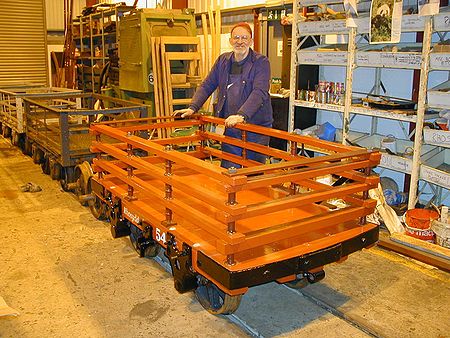 Headstocks were made from new hardwood by bandsawing and routing and all components were assembled using modern sealant to keep out wet and the risk of premature rotting. The one concession from originality is the anchoring of the "heels" of the brake-bands over each wheel, which proved impossible to mount through the ends of the solebars due to some dimensional mismatches between the drawing and the components received. So these are mounted below the wooden solebars on new lugs.

The recreation of the bodysides, using the original "bobbin" iron spacers, follows the drawing as accurately as possible; and the colour is as close as can be ascertained to Festiniog practice for wooden slate wagons. The lettering is purely conjectural, based on the known need for wagons in the Croseor Valley to carry their owners' names. "54" was the total number of Rhosydd slate wagons known in 1928.

The original cast-iron wheels proved to be too weak and cracked for safe use and have been replaced with one-piece cast-steel wheels using the originals as foundry patterns for them. The 5-spoke wheels are very unusual. One pair of axleboxes are whitemetalled into the iron as per most Festiniog slate wagons, but the other pair are again unique in having a bronze insert half-bearing.

Use: The wagon will remain in undercover storage until such time as museum accommodation is available for it, but will be brought out occasionally for display and to run on such occasions as galas in the Ffestiniog Railway's unique restored gravity slate train down its continuous 1 in 80 gradient, something that last happened commercially before the Second World War. 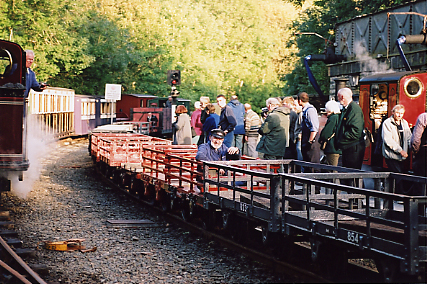 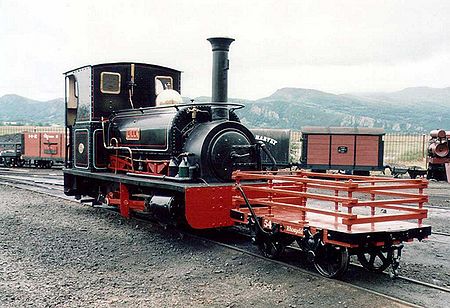 (From an original article by Bob Rainbow, who has provided the photos) (Acknowledgement for the original drawing is made to Lewis & Denton's "Rhosydd Slate Quarry," publ. Adit Publications, Mold.) 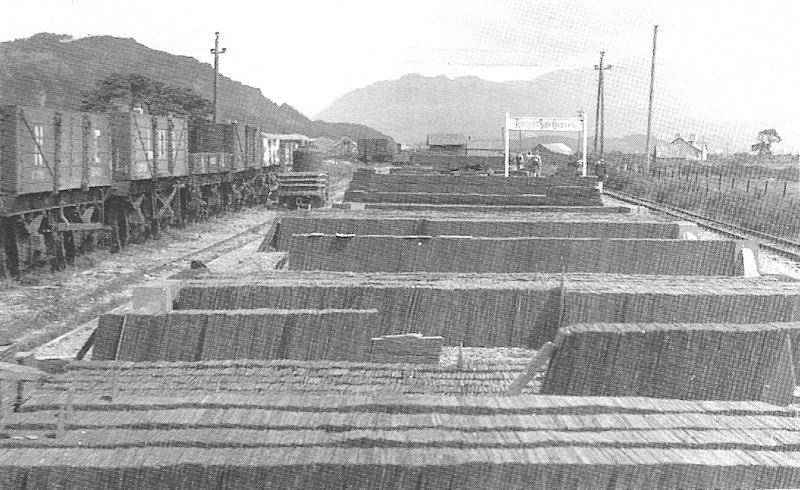