There was a van with double doors at both ends which was used as the Breakdown Van, equipped with jacks and other tools for rerailing stock. This would appear to be the van in this view in 1935. 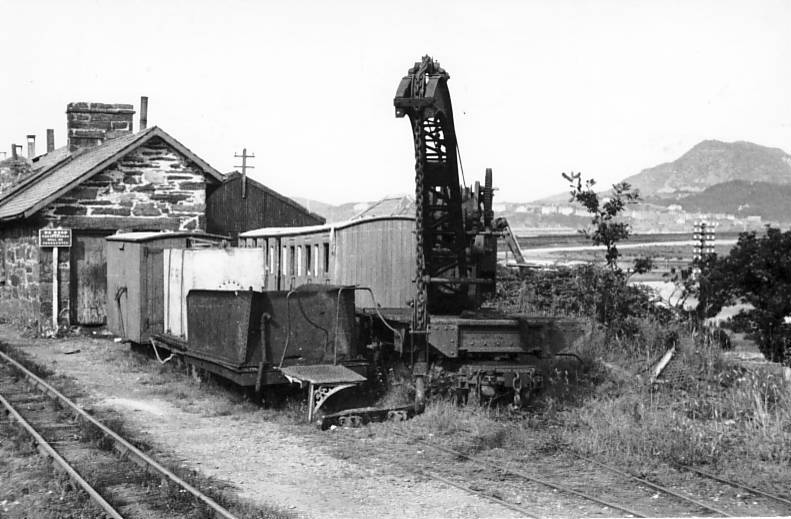 By 1954 it was the only item of stock left at this location and can just be seen in the bushes in iBase 813 - it had lost its doors by then. Later that year it was salvaged and rerailed by a volunteer working party and used on early line clearance work as recounted in a letter from Andrew Wilson (in FR Heritage Gp Journal 124, p46) - it is seen in the gateway at the Works entrance while the track is being dug out (Photo in FR Heritage Gp Journal 110, p41). It had inside bearings and vertical planking, and may conceivably have been converted from a Type 2 Quarrymans. By 1958 it was in the Top Yard at the back of a line of other interesting stock (iBase 794) still with no doors. It is not known if it had any number. This van is no longer in existence.

This had sliding doors in both sides and was converted from a Type 3 Quarrymans'. Boyd considered it a Goods and Parcel van, vacuum piped and converted in 1910. Seen derelict but looking sound in 1947 in iBase 946, but according to Boyd had disintegrated by 1950. This or another similar may have been used for meat traffic on the WHR.

Built 1898,***, Four wheel, braked, wooden bodied covered van (with side door). Built FR Co. at Boston Lodge sometime before 1898. Old Co. No. 116. Renumbered 99 sometime after 1958 and before 1974. [1] Rebuilt off-site in 1993. Was used as electrical stores van until early 2015. Withdrawn for restoration and to join Heritage Fleet.[2] Over 2017 Van 99 was extensively rebuilt by the carriage works volunteers and was finished in time to join the heritage freight train at the October Victorian weekend.[3]

For iBase go to http://www.ffwhresource.com then enter the number in the search box.