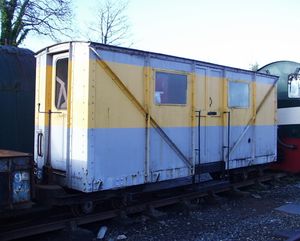 Built by R. Hudson Ltd., Leeds, and rebuilt FR Co. at Boston Lodge in 1983 for use as a Breakdown Van from wooden van body ex R.N.A.D. Ernesettle.

1988 saw it transferred to the Civil Engineering Dept for use as a mess van. By 2000 repairs were needed and these were carried out by the Buildings, P. & G. & Electrical Department. (The report of this erroneously quotes number as 57 (there are two other vehicles already called Wagon 57, see Open Bogie Flat Waggons and 2-Ton Slate Waggons (Braked - Un-Ratcheted)) These repairs were completed and the body was repainted by the Hartwell family in the Permanent Way/Civil Engineers colours of grey and yellow. Used as a mobile workshop and stores van by the Permanent Way Department.

Sold Dec 2014 to the Moseley Railway Trust and removed to Apedale.