No 8 was built by Festiniog Railway Co. Boston Lodge works in 1880. It is a six-wheel metal open wagon mounted on flexible two-wheel trucks to James Cleminson's patent.[1]

Although No.8 is known as 'the Cleminson' (iron bogie in old company terms) its underframe arrangement does not conform to Cleminson's patent in all respects. The outer axles are permitted to turn and the centre to swing as the patent suggests but the connections between the components lack a vital extra link. This may be ascribed to any one of several reasons. The wagon was built at Boston Lodge during the Spooner period. Spooner may have been trying to circumvent Cleminson's patent, to avoid fees, even though he and Cleminson were acquainted and Cleminson was intimately involved, with Spooner, in the North Wales Narrow Gauge Railways. Spooner, or the Boston Lodge staff, may have misunderstood the finer points of the arrangements or Spooner may have been trying to improve upon the design.

A photograph (iBase 989) dated 1923 taken in Boston Lodge Yard shows (in the background) part of this wagon, with the number 6 clearly visible. It is not known when it was renumbered. It is just possible this is not its number but its load rating, with the word TONS on the next panel (which is not visible) but this seems unlikely as there is plenty of room for the whole inscription on the visible panel. It was rated at 6 tons in 1930 as seen in iBase 3277.

By the date of this picture it had been fitted with a corrugated-iron roof, and was used with other vans for flour traffic to Penrhyn until the 1946 closure.

Rodney Weaver reported that as first used after 1954, No.8 had some discreditable habits, among which was derailing on entering a curve when fully loaded. Carrying coal from Minffordd to Boston Lodge, it would come off at Minffordd (curve down to the Yard) or all over the points at the entrance to Boston Lodge Bottom Yard. The wheels would point in differing directions so the only remedy was to shovel the coal onto the track, rerail No.8 with jacks and crowbars, then reload it, whereupon it would derail once more. This behaviour may be explainable by the missing links between the trucks as described above. It is not known if the links are now fitted.

During the 1960s and early 70s No.8 was used as an ash wagon at Boston Lodge and suffered serious damage to its original wrought iron floor and lower body sides as unquenched ashes burned. At some stage it must have become red hot as the whole body distorted.

The ruined plates were cut out and weldmesh put in place to keep the wagon 'useful'. For a while it was host to bits of Prince. During the late 1980s to early 1990s it was parked on a section of track outside the Goods Shed at Harbour Station. 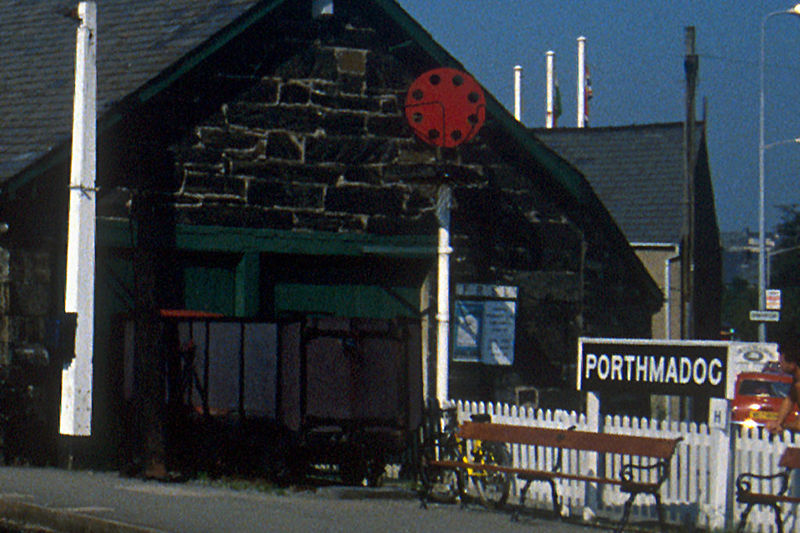 Outside Harbour Station Goods Shed, whilst the wooden fence and disc signal were still in situ.

During the mid 1990s No.8 was taken in hand by the FR Heritage Group. Whatever the truth, the wheelbase of No.8 has proved short enough as to make the articulation unnecessary. While FRHG were restoring the wagon it was shunted around the yard at Boston Lodge, where there are some sharp curves, and the greatest deflection of the centre axle recorded was less than one inch (25mm)!

Working parties led by David High removed the weldmesh and replaced it with mild steel plate. (FR Heritage Group could neither source, nor afford, wrought iron plate.) Where joints were visible, such as with the remaining original body panels, they were made by the traditional 'hot rivetting' method. Within the floor of the wagon the plates were welded. This had the benefit of eliminating raised seams and rivets which can have very painful effects if they are struck while shovelling loose materials such as sand, ballast or coal. 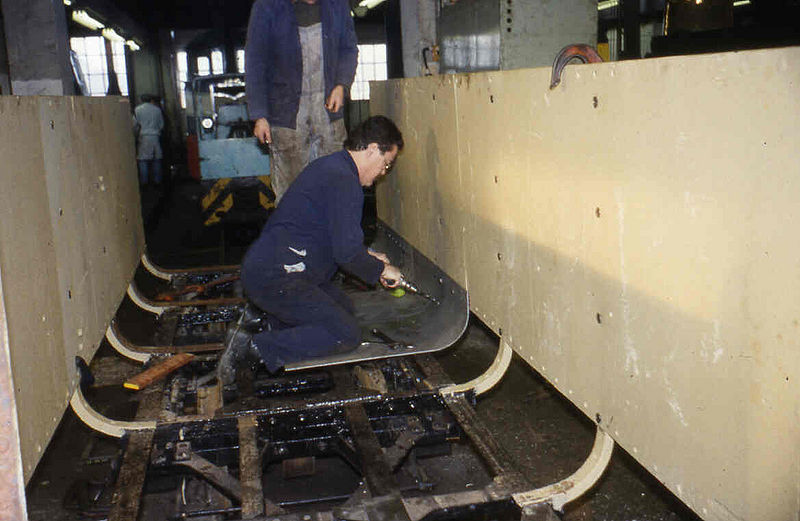 During 2006, after consultation with the members of the Heritage Group who had done the earlier restoration, No.8 was returned to traffic to serve, once again, as a coal wagon as the FR returned to coal firing locos. Initially used to bring coal to Boston Lodge from Minffordd, until the conversion of the two ex-SAR bogie 'B' wagons, after which No.8 has been used to hold a back-up supply of coal at Harbour Station near to the Water tower. 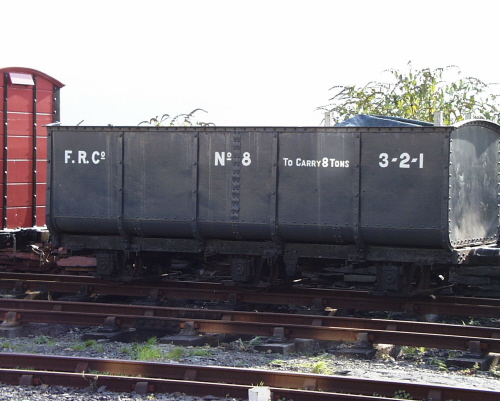 On display at Harbour Station