In 1884 Boston Lodge built a four wheel carriage truck at a cost of £18 10s (£18.50). Similar vehicles had been used by main line railways from the very earliest days when the gentry would have their favourite horse-drawn vehicle loaded, and then used it to travel in for their journey. It probably has some bearing on the use of carriage/coach as the terminology for passenger carrying railway vehicles.[1]

Though the roads in the Vale of Ffestiniog may have been poor the building of such a vehicle, as late as 1884, can only have been for a specific purpose, or as an indulgence, as it could only carry the smallest of horse-drawn vehicles such as a trap or dog cart, due to the restrictions of the loading gauge and the length of the truck. The truck may have been built for the Oakeley family, who also had their own private carriage, or it may have been built for the convenience of C E Spooner who might have wanted to take a trap up the line when he visited the quarries he served as Consulting Engineer. It has to be assumed that the accompanying horse would be carried in one of the horse dandies normally used on gravity trains.[1] 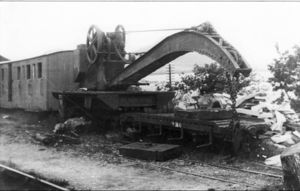 There are no known photographs of the truck in service and it ended its days in the siding behind the engine shed at Boston Lodge as a jib runner for the rail-mounted crane bought by Colonel Stephens. Whether it was ever actually used for this purpose is a moot point as the crane is not known to have ever gone out apart from a brief and unsuccessful trial on the Harbour, and it would not have passed under Rhiw Plas bridge anyway. The truck may be seen in the photos here. It was still there in 1932 but had gone by 1935, whether for scrap or just moved somewhere else is unknown (it would have been necessary to move it to put the wagons in the other siding). By this date its tare weight had reduced by over a hundredweight as branded (compared to the picture above), but it still has no running number.

In early 2018 plans for a replica of this vehicle were well advanced, with patterns for the wheels already made.[2]