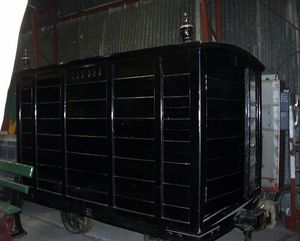 Thought to be a conversion of a Mk.2 Quarrymen's Carriage in 1885-6, with inside bearings and double end doors. However, construction is somewhat different to other Mk2s but evidence of passenger doors is very much in evidence. Sombre dignity was added by painting it black while it was also graced by the addition of a cast iron Grecian funeral urn at each corner of the roof. Hearse vehicles were not uncommon on a variety of railways in Victorian times and in the case of the workplace death of a quarryman who resided in the Penrhyndeudraeth or Portmadoc areas, rail transport of the corpse from Blaenau Ffestiniog would be a necessity.

Its last known use, pre-restoration, was in July 1946, about two weeks before the closure of the railway. Princess, driven by Tom Davies took the body of a Mr Evans from Rhoslyn Cottage at Dduallt by hearse to Blaenau Ffestiniog.

The hearse van survived to preservation times and was finally restored to running order in 1991 to carry the ashes of Maggie Warner, a much loved volunteer. Since then it has been used only twice; in 1999 when it carried the ashes of Michael Seymour to the memorial garden at Tan y Bwlch and then for the same duty during the Victorian weekend in 2017 when the ashes of R John Powell were taken to Tan y Bwlch.

The hearse had been retrieved from a period of extended loan to the WHHR museum, at Gelert's Farm Works in Porthmadog in September 2017, as it required some TLC and in anticipation of carrying RJP's ashes. The TLC, kindly sponsored by a member of the FR Heritage Group, was completed during the winter of 2017, including the fitting of a discreet through vacuum pipe[1]

In spite of the TLC the Hearse is not suitable for use on the line without special arrangements being made and as a result is not available except under exceptional circumstances.[2]