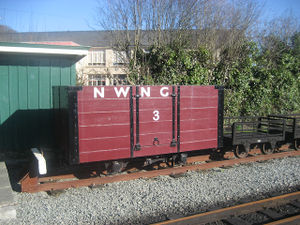 These large four-wheeled wagons were built to carry coal for the North Wales Narrow Gauge Railways (NWNGR). The published accounts show a total of 12 coal wagons by June 1881 to June 1897, 14 from December 1897 and 13 from December 1909. From 1913 the categories of slate and open amalgamated into Mineral Wagons under 8 tons.

There were at least twelve coal wagons in 1878, as in that year coal wagons numbered 9-12 were transferred from the ownership of J. C. Russell to the Moel Tryfan Rolling Stock Co. Ltd. along with other assets. Under both ownerships they were leased to the NWNGR, and in 1880 the NWNGR paid off the debt and assumed ownership again.

Boyd believed that some of the coal wagons were renewed or replaced in the 1890s. This might explain the slight rise in totals if some replacements were in service before the old ones were deleted from the stock list. Certainly in WHR days there were variations in the constructional details as might be expected from different build or rebuild dates. Typically they had a single top-hinged door in one side only and a handbrake on the other side. This is in contrast to the typical FR large coal wagon which had side-hinged doors in one end, and no side door.

The large wagons survived into WHR days - sample numbers 3,4,6,10,12. Both Major Spring in 1921 and Robert Williams in 1922 give a total of 13 coal wagons, but this figure may have included the Cleminson wagon as this also was a large coal wagon.

Surviving records of slate shipments show slate being carried in wagons with numbers in the 1-12 range duplicating the numbers of the coal wagons. It is therefore likely that the coal wagons and slate wagons were numbered in different series, as was done on the Festiniog. It would have been extremely awkward to load slates into the large coal wagons.

The capacity of the four-wheelers was about 4.5 tons of coal and Major Spring in his report rated them as such. Neither the NWNGR or WHR marked their wagons with a load rating. Their major dimensions were: 10 ft long, 5 ft wide and 5 ft 6 in high, but with individual variations. Number and width of planks varied over the years, between and within individual wagons.

No original has survived but a replica has been constructed using ex-RNAD running gear, in the heritage wagon collection of the WHHR.