This page covers pre-1946 bogie wagons on the FR. Bogie open wagons acquired by the post-1954 administration are here.

Two high-sided bogie waggons Nos 88 and 105 were built at Boston Lodge in 1874 as 12-ton ballast wagons, later used for coal. One at least bore the painted legend 'Permanent Way Ballast Truck'. In their latter days the doors were permanently closed and some of the door furniture removed. One is seen in this condition in iBase 549. They were dismantled about the time of the First World War.[1]

Four ex-War Department bogie open wagons were acquired in Oct 1925 for Beddgelert coal traffic [2]. These were probably Welsh Highland property and were WD type D steel-framed dropside wagons, as used on the Ashover Light Railway where they were rated at 10 tons. There was also a wooden-framed version of type D which the ALR rated at 8 tons, but it is not thought many of these appeared on the WHR/FR except one in iBase 3047 seen in Dinas Jc shed after closure, and (possibly the same) one by the water tower at Beddgelert in 1928[3]. The wooden-framed wagons were distinguished by having four narrower planks in sides and ends in place of the three wider ones on the steel-framed type, overall dimensions being the same.

The D type wagons were built for the WD in large numbers by many firms, and were designed for a 3 ton axle-load, which with a tare of about 2.5 tons (which varied according to builder) meant a capacity of about 9.5 tons, adjusted to total exactly 12 tons with the tare weight, according to works photos of several varieties[4]. However the WHR/FR seem to have rated these as 5 ton wagons. A theory has recently been advanced that as the Railways only had short weighbridges suitable for four-wheeled wagons, the five tons branding was intended to mean per bogie as that would be how they were weighed, which sounds like a good practical system. A photo shows one with the number 14[5] but other numbers are not known. It is not recorded that Robert Hudson Ltd made any of the type D wagons, though they did make wagons of other WD types. However the D-types are often referred to as 'Hudson' wagons in Festiniog literature of the revival period.

Five similar wagons, allegedly new, (but probably built for the WD but unused) also rated at 5 tons (as above), were received in March 1926 for Brookes Quarry traffic to Blaenau. These were FR property, numbered 1B to 5B. These five might have included some German-built wagons also used for Brookes traffic (Boyd is contradictory on this point), but it seems that some of the WD-type ones from this batch ended up on the WHR coal traffic after 1930[6]. A well-known photo of Beddgelert in 1930 (with Little Giant and Russell[7]) shows a WD wagon marked FR but the number is not legible.

iBase 3027 shows a WHR goods train including two of these wagons.

The German wagons were probably Heeresfeldbahn (German Military Light Railways) type, built 1916-8 according to worksplates recorded by Boyd, and may have been additional to the five wagons acquired in 1926, and possibly owned by Brookes, not the FR, according to Boyd. However Sydney Leleux[8] was of the opinion that the German wagons were definitely owned by the FR, as they were not listed in a comprehensive inventory of Brookes' plant and equipment taken in 1927[9] . These would be the wagons shown in the background of this picture, taken in 1947. The bogies are not Hudson or WD type. The bogies under the right-hand one look like the most common Feldbahn type, and those under the left one look like the bogies used under wagon 68 in 1974 as illustrated in Boyd [10]. , where he says the bogies are from Brookes' Quarry. (68 was later fitted with WD type bogies). 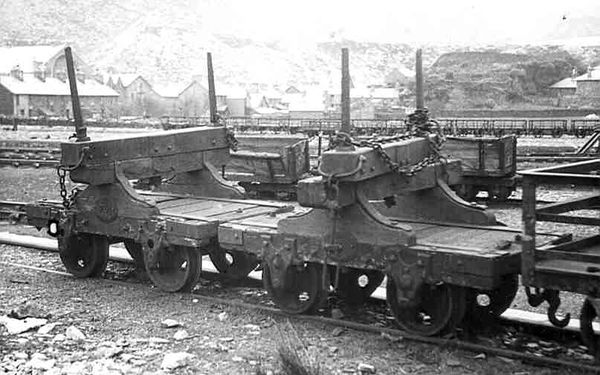 Brookes Quarry Bogie Wagons seen behind a pair of wooden bolster waggons in 1947.

The right-hand wagon of the pair may be seen more clearly in iBase 1753. The sides and ends can be lifted out of the sockets on the sides of the underframe, they are not hinged like the WD wagons. This would seem to be very like Heeresfeldbahn 'Modell 18' except slightly longer in the panels outboard of the vertical stanchions on the sides (note the handles on these stanchions). Compare this picture with 'Modell 18' wagons on http://www.hfwagen.de/ - select 1871-1918 DE, then Modell 18, then Friedrichzeche in Regensburg and scroll down for a nicely-restored example (the handles on the stanchions had not then been fitted). IBase 2222 shows the skeleton of one of these derelict in Brookes Quarry in 1952, and it may be seen to be very similar to the drawing of the Modell 18 on the website http://www.hfwagen.de/ except longer and with one additional crossmember.

The skeletal remains of two of them were in the Top Yard in September 1958. 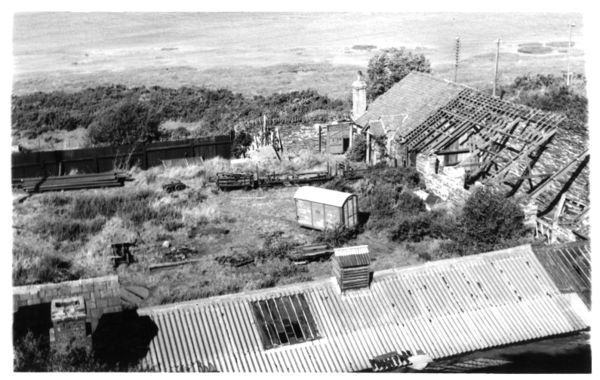 When Moelwyn was rebuilt as a 2-4-0 in 1957 the new pony truck included half of one of these ex-German wagon's bogie frames of the type under the right-hand wagon. (The pony truck has more recently been rebuilt with new material). 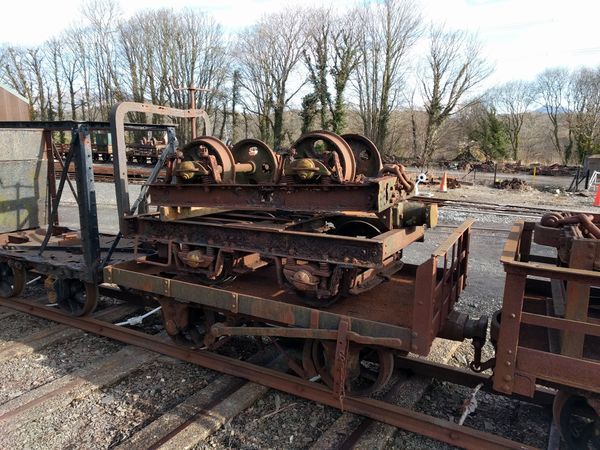 The Hudson open carriages 37-42 had underframes and bogies of WD type and sometimes had their bogies taken as spares for the coal wagons. Two of the Hudson carriages were converted to flat wagons in 1926 and two more in 1928. It is not known what if any traffic they were used for in this condition. The remaining two carriages were in use in the mid 1930s, and survived the war in a derelict condition at Boston Lodge, but their bodywork was scrapped in the early revival period.

Four of the WD type underframes (some if not all formerly carriages) survived into the preservation era (see Bogie Coal Wagons for subsequent history), as did some Feldbahn bogies.