During the inter-war period, a mystery carriage was parked in the back siding behind Boston Lodge Engine Shed, hemmed in by the "white elephant" ex-WDLR crane that was acquired by Colonel Stephens in 1926 for use on the FR and WHR. There are a number of photographs of this carriage that has, as of 2009, eluded proper identification. Despite the efforts of many, neither the origin nor the ultimate fate of the carriage has ever been satisfactorily established. It is not even definitively known whether it was originally supplied to the FR or the NWNGR, although the evidence points towards NWNGR as being most likely.

Research has been done to try and identify it, and some of this work is presented below.

Photo 1, taken by Ronald Shephard probably in 1929[3], is not dissimilar to Photo 4 but shows the whole length of the carriage, as the nearer line is clear of stock.

The carriage and all other items, except the breakdown van are missing in iBase 813 taken in 1954. Given the state of the carriage it seems likely that it did not even last up to the closure in 1946.

Three are similar in their perspective, taken from the Minffordd direction with the crane (and match truck) as the main subject in the foreground with the mystery carriage beyond, while the photo 3, taken by Whitworth, also has the crane as its main subject but is taken looking the other way and captures, slightly out of focus, only one corner of the carriage.

Examination of the photographs tells us that it was a seven compartment bogie carriage with a full-height door, with droplight, to each compartment.

Fenestration otherwise was severely limited with but a single narrow window between each pair of doors, there being no window between the door and the carriage end at the Blaenau Festiniog end but there may have been at the other, the photos are unclear on this point; if the end window provision does differ then this carriage may have been intended to serve as a brake vehicle. It is possible that these windows were only provided for ventilation, being closed by a shutter rather than a glass droplight, but either way their position shows that there cannot have been any full-height partitions between compartments.

The general construction details of the carriage suggest that Ashbury may have been the builder and the late 1890s the period of construction, perhaps following on from FR 21 and 22, though this carriage clearly has a flat floor as on NWNGR 11-14 rather than incorporating any well as on FR 21 and 22. The remains of a continuous brake hose fitting can be seen on the matchboarded carriage-end but insufficient detail is visible to determine whether this was for vacuum (as on FR) or Westinghouse (as on NWNGR) braking systems. It is not even clear whether the carriage conforms to the FR or to the slightly higher NWNGR loading gauge, if the former it must have seemed very claustrophobic to its occupants.

None of the photos show any signs of lettering, even though the decay visible over six years is not great (so it was built with good quality timber), suggesting that even in 1929 it was many years since the carriage had borne any livery. A number of doors, together with some other door furniture, are missing, perhaps taken for use elsewhere. The index to the FR archives at Caernarfon (XD97/21465d) suggests where some may have gone: '1 February 1925 Rebuilding old FR Brake Van - let me have plan - use best of old WH doors for this.' It is not even possible to be certain that the carriage is seen standing on its own bogies, so these too might have been taken for use elsewhere.

The restricted fenestration strongly suggests that the mystery carriage was never intended for any use other than the conveyance of quarrymen, it certainly being unsuited for tourist traffic on either railway. However no record exists of any order for its construction and no photos have been found showing it in traffic. It is as if it existed, but didn't exist, a real enigma.

Additionally the following comment has been provided by Michael Davies:

I am convinced that it was the ex NWNG 'Workmen's Car' No 3 that Williams saw at Dinas when he visited in 1922. The other 'Workmens' was No 7 of which just a few pics exist. Both vehicles never saw operation on the WHR but No 3 must have been worked over to Boston Lodge and various bits used, such as doors etc. (editor's note - with space at Dinas being at a premium, this movement wouldn't have been unusual) 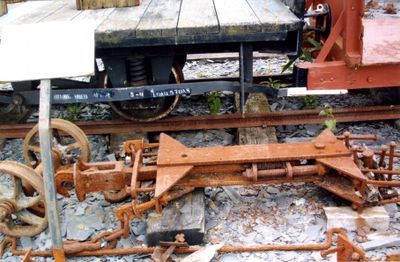 In a letter to the Board of Trade dated 20th September 1897, Samuel Tanner, referring to the 4-wheeled carriages, wrote; "I beg to say that these were taken out of traffic sometime ago and a new large coach fitted with the Westinghouse Brake has been put into use in place thereof." Michael Bishop has shown that the Company's Accounts include a capital expenditure that could have accounted for such a carriage at this time. It is further speculated that the carriage to which Tanner referred, was given the number "3" and possibly was the "Mystery Carriage". There is no other evidence, thus far at least, to confirm this speculation. On the basis of this speculation, the table has been extended to show a possible NWNGR Carriage Numbering sequence immediately prior to the acquisition of the Pickering Brake Composites in 1907. He also points out that, comparing the mystery coach with the crane next to it, suggests that the coach roof is about 8 ft above rail level, which is the height of other NWNGR carriages 11-14 before they were cut down by the FR, whereas the Festiniog Coaches (EG Nos 21 + 22) were around 7 ft 8" in height. Which gives additional weight the argument that it is more likely to have been a NWNGR acquisition rather than a Festiniog one.

It has been suggested that the Pickering Brake Composites were acquired to replace the Cleminson Brakes and not the Ashbury Brakes Nos 1 and 2 as has been previously supposed. However Russell as Receiver and Manager said in October 1906 in justification of the purchase: "It has become necessary to replace 2 old Composite Carriages and Brake Vans by 2 new similar Vehicles. The 2 now running have been in constant use since the Line was first opened for Traffic since the year 1877." Not categorical evidence, but the two Ashbury Composite Brake Vans had been delivered for the opening, while the three Cleminsons, one third and two composite brakes, were not delivered until December of that year.[4] The Pickerings Order Book confirms the two new coaches were numbered 4 and 5, which fits in with the speculation that the mystery coach had been numbered 3 ten years earlier, thus filling the numbers left vacant by the withdrawal of the four-wheelers.

Closed coaches 3 & 7 were described as "dilapidated" in 1923. Boyd claimed that they were allocated numbers 32 & 34, but it seems more probable that these carriages never received WHR numbers. As stated above, it is possible that the carriage photographed at Boston Lodge in the 1930s and often described as the "Mystery Carriage" was the "dilapidated" Number 3.

There is some coach metalwork in the display at Gelerts Farm which originated from Boston Lodge, and which the side chains suggest came from one end of a NWNGR Coach (the FR did not have side chains). This could have come from the mystery coach, although it could also have come from No 7. [The buffer head on the Gelerts Farm ironwork is round; this suggests it is from an Ashbury coach (perhaps No.3 ?); Surely Metropolitan Nos.7 & 8 had square buffer heads, therefore this is not from No.7. - A.J. Padley]

David Woodcock prepared this drawing based on the photographic evidence.

A model of this carriage is displayed in the museum at the WHHR. The model shows how it might have looked in NWNGR livery and carrying the number three. 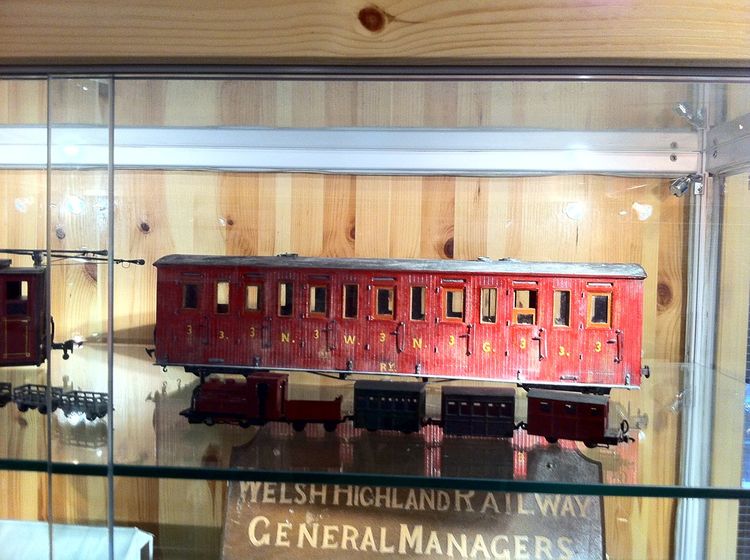