The Snowdonian is an annual special train that runs over the full length of the Ffestiniog and Welsh Highland Railways. Money raised from the operation of the train is used to support the development of the railway. The first train ran in 2011.

The first Snowdonian ran on the 2nd April 2011, the following is taken from a report by Andy Savage, the organiser of the event:

'The Snowdonian was intended to be the first publicly available train to run on both the Ffestiniog and Welsh Highland lines, and was designed to raise money for the Phase 5 project. Despite the somewhat cheaper LAG train Eryri Venturer the week before being opened up to all comers, our train sold extremely well, with over two hundred passengers. Our first class seats all sold out at an on-line auction, with prices between £200 and £668, whilst most of the third class seats went at £130 each. 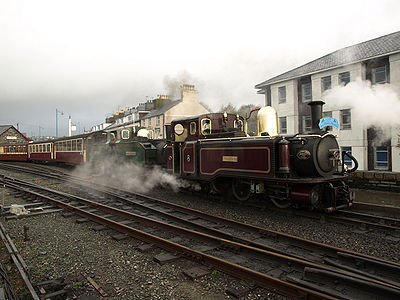 Departure with Tal and the Earl

The train was designed to be a luxury experience, with a full catering and meal service, and an open topped bus following along those roads where it was possible to take pictures of the train. We also set out to use all four FR Fairlies on the train, and to provide a run past at Rhyd Ddu on the return journey.

Departure was from Porthmadog at 08.45, which we managed promptly, despite a half hour game called 'hunt the carriage boards'. Taliesin III and Earl of Merioneth hauled us briskly to Blaenau, where we ran round and set off back, unusually with the Earl leading so we would always have a chimney at the front of the train. We paused for five minutes at Tan y Grisiau so we would be able to run straight through Tan y Bwlch, where we were to pass the service train - but alas it was not to be. No doubt in a sulk at having been left off the special roster, Blanche was in a sulk, and lost nearly half an hour by the time she reached TyB with the service train. Control had a rapid re-think, and we found ourselves without the Earl, which went back to Blaenau, whilst Taliesin took our ten corridor cars down the hill to Minffordd - certainly the longest train it has ever hauled on the FR, although it did take 11 to Hafod y Llyn on the WHR a couple of months ago.

At Minffordd we lost our single Fairlie, to be replaced by a real super power combination, with Boston Lodge's finest, 1879-built Merddin Emrys double heading with his 1992-built brother, David Lloyd George. We ran down the hill to Boston Lodge, across the Cob, and set another first as we sailed through Porthmadog Harbour station non-stop. The Routemaster was with us all the way over the Cob, so we hope they got some good pictures.

ME leading DLG, straight through Harbour, and onto Britannia Bridge

Unfortunately our second set of gremlins came into play. A DMU had failed on the Cambrian line, in the immediate vicinity of Cae Pawb crossing, and it had locked up the ERTMS system so we could not get a release for the crossing. Still, a stop at 1923 New Station always was traditional, wasn't it? Soon enough, Arriva and Network Rail got their act together, and we set off north - only to arrive at Pont Croesor and find that we'd lost our Routemaster. Fifteen minutes later and we had to abandon all hope of finding it, so everyone got back on the train, and off we went for Beddgelert. The sound of the four chimneys as we were blasting up the 1 in 40 gradients at Nantmor gave us a taste of what was to come after lunch, and we made our way through the Aberglaslyn Pass, and arrived at Beddgelert at about ten past one, some half an hour late, to meet a delayed up train hauled by Garratt 138.

The Goat Hotel was magnificent - they laid on a superb lunch, handled our late arrival with aplomb, and served everyone very quickly, so that we recovered much of our lost time, and left Beddgelert at 14.15, only fifteen minutes down. Both our locos performed superbly up mile after mile of 1 in 40 - those who were back on the Routemaster said it was magnificent to watch - and all to soon we were passing Rhyd Ddu and Waunfawr - where we met Caernarfon Castle heading south with its train returning to Porthmadog. And so down the hill to Caernarfon, where we had time for a leg stretch and loo stop before we set off back up again, on time.

138 hadn't hung around either, as it was also on time when we made our final crossing move at Dinas, and as the sun started to lower we climbed back to Rhyd Ddu, with everyone enjoying tea and scones. Here almost 200 people worked off the scones as they jogged up the hill to Fridd Isaf, and the train set back for a run past round the curve - magnificent to watch, and some lovely pictures taken. 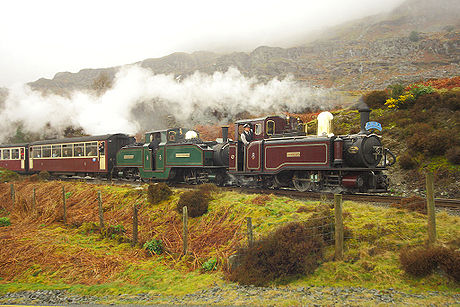 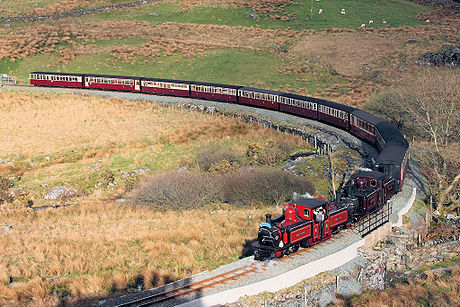 Back on the train again, play a quick round of 'find the missing passenger', and we were off home on the final leg. Fortunately the gremlins had finally gone to sleep by now, and we uneventfully arrived at Port at about 19.10, where Vale of Ffestiniog was waiting to bring us back into the platform, only ten minutes down after nearly ten and a half hours of railroading.

Some stats from the day:[edit]

there were eight engines out on the quiet, out of season, day - six steam and two diesel

The fare revenue from the train was about £30,000, plus another £7,000 in donations and covenants in the day, and £2,300 in sponsorship of the train. We haven't sorted out how much of that £40,000 is profit yet, but what there is will be divided in two, with half going to FR Co and half to the Phase 5 improvement for the sustainable railway - in effect all the profit goes to capital improvements

Our four valiant stewards served two hundred bacon butties, the same number of cream teas, and gave up counting how many cups of tea and coffee. They did it all with loads of smiles - our thanks to them

The bus carried an average of about ten people. It was a new experience, and worth repeating, we think.

As far as we can tell, we had 100% customer satisfaction - the letters of thanks we've had all point that way, certainly.

Thanks to the two major sponsors, who paid for the fuel, and to Steam Railway, who funded the headboard.

Me, I went and climbed up Snowdon the next day to relax! 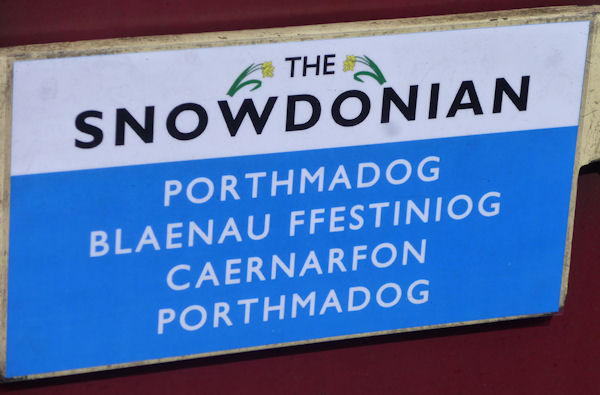 There is quite a long YouTube video report by Tom and Matt Waldren Part 1 is here, Part 2 here
There is a much shorter one by John Wooden here

The Snowdonian ran again on Saturday 14th April 2012. The formations were as follows.

Once more, the Snowdonian ran on Saturday 13th April 2013. For this year, the order was reversed, running to Caernarfon first before returning straight through Harbour Station on the second leg to Blaenau Ffestiniog, finally returning to Porthmadog in the early evening.

2014 saw the 2013 order repeated, running on Saturday 12th April and being one of the first trains to take proper advantage of the newly-remodelled Porthmadog Harbour Station. The motive power theme was 'Firsts and Lasts', the Welsh Highland section was headed by K1 and 143, whilst the Ffestiniog section was handled by Prince and Lyd. The loco change was at Pen Cob.

The 2016 'Snowdonian' ran on Saturday 16th April, again travelling the Ffestiniog section first, before taking on the Welsh Highland. It was notable for using a visiting loco, Darjeeling 19B, a visiting carriage, Parlour Car Carrabasset, and being the first public train incorporating the new 'B-Set' - including the new observation car 150.

The 2016 train proved so poular that a second train was run on the 11th of June, called The Snowdonian Limited. The first leg of the journey from Porthamdog to Caernarfon was completed non-stop. This was achieved using the water tanker wagon, DZT2003, connected to 143's water tank with newly installed pipework. The water wagon was shunted out at Dinas on the return leg.

The 2017 'Snowdonian' ran on Saturday 8th April, again travelling the Ffestiniog section first, before taking on the Welsh Highland.

The Snowdonian Limited ran again for 2017 on the 10th of June.

The train was delayed on the FR portion by a fire near the line. The delay ultimately resulted in the train being turned round at Waunfawr in order to make it back to Porthmadog on time.