Carriage 107 is a declassified composite saloon from the Centenary stock series.

In the 1960s the Festiniog Railway began construction of a series of modern wooden bodied coaches at Boston Lodge. The profile was based on that of the restored former Lynton and Barnstaple Carriage 14. As a result these coaches are known on the railway as "The Barns". With a requirement for more carriages, in 2004 construction began of two new coaches to a similar design of which this was the first one in service.

This carriage started out as a rebuild of derelict Carriage 106, entirely by volunteers. Funding became available to finish this off with paid labour. A donor offered the funds for a new underframe (to be built by works staff) so the volunteers carried on building the new body whilst the paid staff built the replacement body for 106. Subsequently funds were raised for new bogies (to the Steve Coulson modified metacone design) and so the FR got a new carriage entirely for free.

During April 2009, the carriage visited the carriage works for a touch up and varnish. The seats were also varnished at the same time. 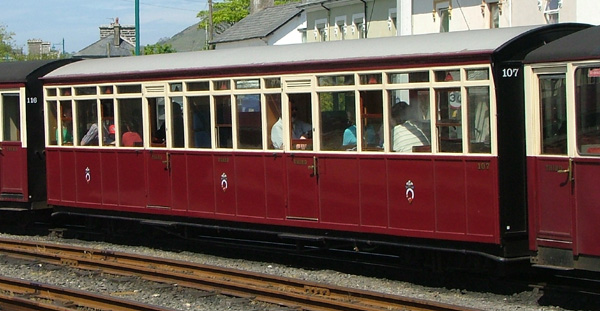