Carriage 102 is a third class observation, saloon and guards van in the Centenary stock series. 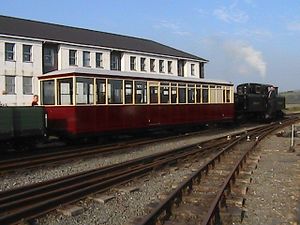 Prior to entering service

In the 1960s the Festiniog Railway began construction of a series of modern wooden-bodied coaches at Boston Lodge. The profile was based on that of the restored former Lynton and Barnstaple Carriage 14 and as a result these coaches are known on the railway as "The Barns". With a requirement for more carriages, construction began of two new coaches to a similar design in 2004. This carriage saw its first tentative service on the AGM Special in 2005.

Unlike the previous three Observation Carriages (100, 101 and 111) built at Boston Lodge, this carriage is not fitted with swivel seats. Instead eight moveable seats are provided, which can be removed to allow one (or more) wheelchairs to enter the carriage. It also has three movable tables in the observation end.

Following the successful introduction of diesel-fired heating in previous carriages (111 and 122), 102 is heated.

Following the introduction of the new observation car/service car pairs 102 became the least used of the modern FR observation carriages. After Carriage 152 was completed, 102 was given the same treatment as the old Carriage 101, being turned so that the observation window faces Blaenau Ffestiniog. The interior was replaced and it is now a standard class observation carriage like Carriage 123, and is accessible to wheelchairs. This will allow both sets to have third class top-end observation cars, after the overhaul of Carriage 123 is completed. It is expected to return to traffic at the beginning of the 2020 season. Turning the carriage also meant that the brake and electrical systems had to be altered. In particular, the brake and electrical connections have had to be moved to the other side of each end, to be compatible with other carriages in the fleet.[1] By December 2019 the carriage was being painted. By the end of March 2020, the overhaul was practically complete, only requiring a visit to the erecting shop to allow the hand-brake to be fitted.[2]