Carriage 121 is an all third saloon carriage in the Super Barn series. 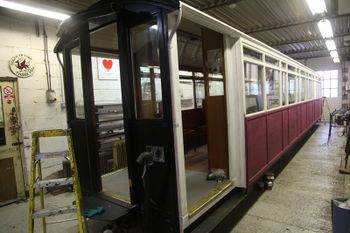 Being fitted out February 2012

During March 2010 it was announced that the FR Society was to fund a new carriage, a twin to newly completed Carriage 103 which would carry the number 121. Fabrication of new bogies and chassis were complete by January 2011. By November 2011 the bodywork was panelled and the ceiling being fitted.[1]

Carriage 121 entered service on Friday 12th May 2012, its maiden journey being the Hugh Napier launch train from Porthmadog to Beddgelert.