During 2009 the question was raised as to why Barn observation Carriage 101 was being left out of use in the open at Dinas, where it would suffer the same eventual demise as its sister Carriage 1000, when the FR was short of carriages.

Carriage 101 was therefore brought back to Boston Lodge and plans drawn up to refurbish it into an all 3rd saloon. The refurbished carriage was numbered Carriage 123, so as to leave the number 101 available for a future new first class observation carriage (the number 123 is a play on 1st to 3rd!). 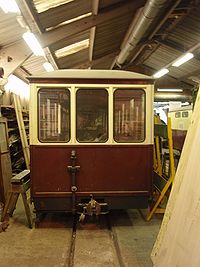 Work was completed with volunteer labour only and was begun in early 2010. By the end of March 2011 work was nearing completion.

The biggest difference is that the carriage has been turned so that the observation window faces Blaenau. Work included the renewing of some of the bodywork and frame and the moving of the partition with the guard's van to create a large area with tip-up seats next to the double doors in order to accommodate wheelchairs. The carriage is now double glazed, insulated and features an Eberspächer heating system. Electrically the carriage has also been modified to act as "converter" between new and old style electric systems - necessary as the vintage carriages which will be coupled above 123 only have the old style system. Note that all lighting in the saloon is by LEDs, this should reduce power consumption and is already leading the way for other carriages to be fitted with LED lighting.

The seating arrangement is such that there are two seats each side facing inwards at the observation end and then two rows of three seats (two plus one) looking through the observation window. Between the end seats is a table on which is engraved a map of the line. Directly above this there is a centre moulding on the ceiling carrying the inscription "Reborn 2011".

As with Van 5 there is only a corridor connection at the bottom end, meaning that the carriage must be at the top end of a rake of corridor carriages.

Once complete, Van 5 was withdrawn from service for extensive remedial work.

123 provisionally entered traffic on the 25th March 2011, making an appearance on the Porthmadog - Blaenau Ffestiniog - Caernarfon - Porthmadog "Eryri Venturer" Charter. Although largely complete, some work was still required on the electrical systems. After this appearance the carriage re-entered the works for final completion before entering regular traffic on the 17th April 2011.

Until 2015 carriage 123 was regularly used on the B set during high summer, providing the set with its wheelchair accommodation. Out of the summer it could be seen in use as a spare reinforcing one of the other two sets. During 2015 it saw use as a spare whilst in 2016 it formed part of C set.

After 10 years of heavy use, Carriage 123 was becoming tired and starting to suffer from body rot around the old guards' compartment. Following the completion of Carriage 102's rebuild, in March 2020 it entered the carriage works for overhaul, which will be undertaken by volunteers, much like 102. The body will require major repairs to the guards's van area and the opportunity is being taken to rebuild this area to be the same as carriage 102. This will see the removal of the double doors at the rear of the passenger saloon. Additional work to the windows and roof is being undertaken to keep the carriage watertight.[1][2] After overhaul, it will then supplement 102 so that both of the main FR carriage sets have a top end observation car.[3] The overhaul work is expected to take around a year to complete.