Carriage 122 is a metal bodied all third saloon.

Carriage 122 was built in 2003 by Steve Coulson[1] and others as a prototype for a possible fleet of new carriages, capable of being used on through services from Blaenau Ffestiniog to Caernarfon. Constructed to the current maximum FR loading gauge, it has an aluminium body and meets many of the modern carriage design standards, including alternate painting of the doors to allow them to be seen by the partially sighted. It does not meet all the requirements of the The Rail Vehicle Accessibility Regulations Act, 1998, and is subject to a partial exemption order, which can be found at The Rail Vehicle Accessibility (FRC Vehicle No. 122) Exemption Order 2003

Furthermore there was a restriction in its usage between the points served by the WHR and FR as it stood at that time. With the extensions from Rhyd-Ddu southwards, through to Porthmadog, a further variance was required for the vehicle to operate on that section.

It is cabled and plumbed (although lacks the high vacuum reservoirs) for Push Pull operation. 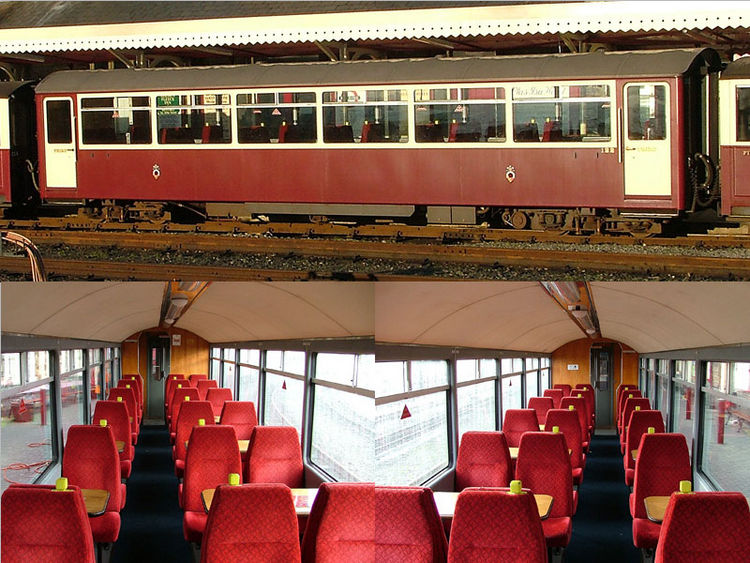 The lower half of the picture shows the internal arrangement - lower left is looking "up" towards Blaenau; lower right is looking "down" towards Caernarfon. In common with the other FR corridor carriages, the double seats are on the view side when traversing the Vale of Ffestiniog. Features in this carriage are the centre mounted lighting and the high back seats.

In 2011, 122 along with 116 was allocated to the WHR to strengthen the two carriage sets operating Porthmadog to Caernarfon. They have remained ever since.

122 received a repaint and refurbishment in Winter 2013/2014; the opportunity was taken to remove the now tatty carpet section down the centre of the carriage and also fit new tables, before it returned to WHR service for the 2014 season.

It is intended for 122 to remain permenantly allocated to the WHR. 122 is considered to be of satisfactory quality and is non-standard on both railways and is therefore considered a sister to Carriage 2060 (it has the same seating capacity).