For the current Superbarn of the same number , see Carriage 117

Carriage 117 is an all third saloon carriage in the Tin Car series. Replaced on the FR by a superbarn it is now at the Apedale Valley Light Railway.

Carriage 117 is an "all steel" saloon carriage with semi-stressed skin, built at Boston Lodge after a review of profiles within the loading gauge and the kinetic envelope. The inside of the saloon is 3½ inches wider than that of the wooden bodied Centenary Stock and 5 inches wider than the prototype Carriage 116. The underframe was originally from an Isle of Man Railway "Pairs" coach.

It was refitted in 1989/90 for use in the new push-pull train. It gained pattern 88 bogies, larger "Beclawat" windows, gas fired heating and the necessary pipes and cable for push-pull operation. The original shorter bogies went under Carriage 17. It was repainted in green and cream livery. It later reverted to the standard red and cream. 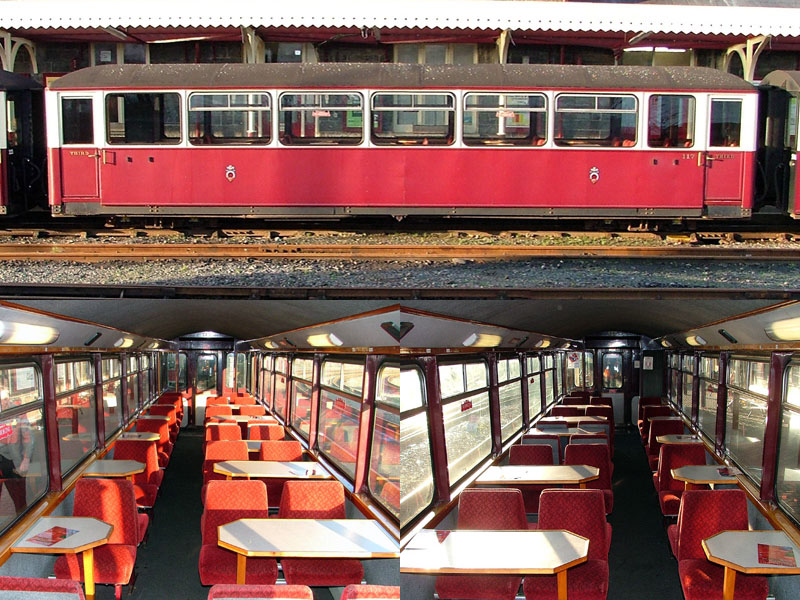 Exterior and Interior Views of Carriage 117, 2006. The top half of the picture shows the external view. The high vacuum pipe can be discerned along the bottom of the underframe (especially on the left) for use when used for push-pull operation. The lower half of the picture shows the internal arrangement - lower left is looking "up" towards Blaenau; lower right is looking "down" towards Caernarfon. In common with the other FR corridor carriages, the double seats are on the view side when traversing the Vale of Ffestiniog. Features in this carriage are the eave-mounted lighting and PA system speakers. At the down end of the carriage can be seen the compartment which houses the gas-fired heating equipment (boiler, gas canisters and header tank). The arrangement of the double seats means that there is a "luggage area" in the centre of the carriage which covers the brake cylinder.

117 was transferred to the WHR for the 2010 season as a replacement for 120 which underwent a refurbishment. Upon its return at the end of the season, it underwent a refit including removal of the gas heating and replacing it with diesel, as well as replacement of floor, wall and ceiling panels. The brake cylinder was relocated to enable the seating to be more logical. Previously, there was an odd pair of seats in the middle over the brake cylinder. Seat spacing has been increased slightly. 117 returned to traffic on the 17th April 2011.

In January 2015, it was announced that 117 would be transferred to the Golden Valley Light Railway in Derbyshire once withdrawn later that year (following in the footsteps of Carriage 119 (1980)). It was subsequently announced that this carriage would in fact be sold to the Moseley Railway Trust at Apedale, with the GVLR taking 118 instead.

After use on B-Set during the 2015 Summer Season, with final use on special trains to both Caernarfon and Tan-y-Bwlch on Saturday 5th September, 117 was removed to Boston Lodge for withdrawal on Monday 7th September 2015.

Carriage 117 left the FR on the 24th of November 2015, as one of the first vehicles to use the new transfer point at the Gasworks Siding. The bogies were not sold with the carriage and were fitted to Carriage 1111.