Carriage 110 is an all third saloon, and the prototype for the Tin Cars. 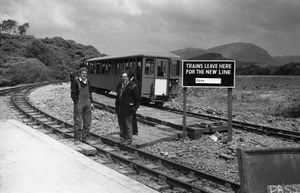 Coach 110 in use in incomplete open form on the Gelliwiog Shuttle at the platform at the top end of Dduallt Station in 1975. Permanent Way Foreman Ron Lester on the right and Mike Chinery on the left. Photo: John Ryan.

Carriage 110 was built in 1975 and was the first steel carriage with a semi-stressed skin and centre spine underframe to be designed and built by Boston Lodge. It was first used on the Gelliwiog shuttle service in a very basic form with only fixed windows and wooden bench seats. It was originally numbered 30 in the open coach series but the number wasn't carried as the paintwork was only undercoat in this form.

When it was completed and fitted out as an enclosed corridor coach it was renumbered into the relevant numbering series as 110.

It was later the first carriage to have a driving position for Push Pull working. It subsequently ran in push-pull mode with Moel Hebog using pneumatic controls. It was fitted with electronic controls for push-pull operating when Conway Castle was fitted as well. It ran in push pull mode with Carriage 121 during the 1988 Gala, which included one turn piloted by Russell. The driving desk was removed during 1988 or 1989. It remains through cabled so retains the ability to be part of a push-pull consist.

The Polish diamond-frame bogies formerly under this vehicle were used under PW Carriage 1111 when this carriage had new bogies of standard design fitted.

This carriage has the highest seating capacity of any 'modern' stock.

During late 2010 the carriage received attention including interior clean up, thorough de-rusting, repainting and revarnishing.

As the first of its type this carriage is earmarked for preservation and will remain in service for the foreseeable future. 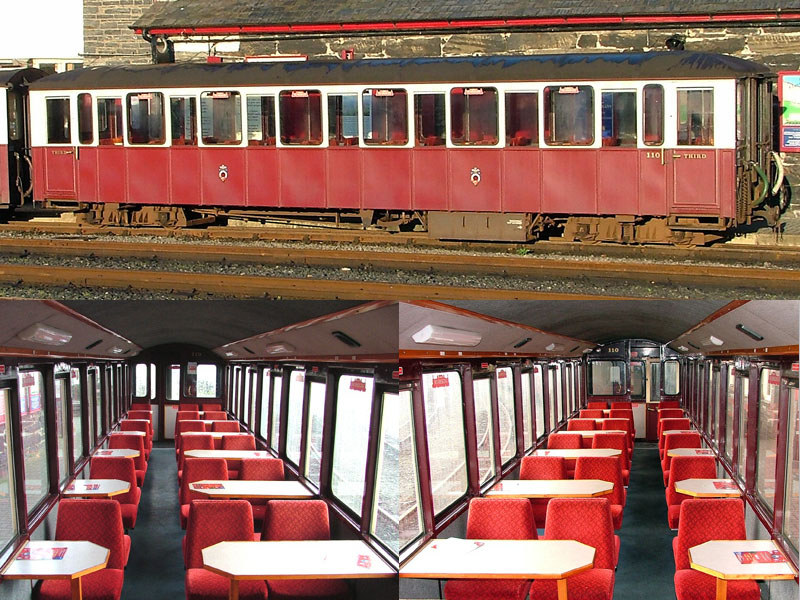 Exterior and Interior Views of Carriage 110

Detail on the top half of the picture includes the underslung drawer which contains the carriage batteries, control equipment and charger (fitted in the mid 1990s when the vehicle was converted to the new style electrical system). At the top end (right on the picture) can be seen (left to right) the push-pull jumper (this style was fitted to be compatible with the "pull-by-wire" control system installed on Criccieth Castle), the high vacuum pipe and the train vacuum pipe. Hidden behind the train vacuum pipe are the electrical connections. From the Norwegian Chopper coupling, chains can be seen hanging. These are provided to restrict the movement of the bob weight when the corridor connection is in use. Not visible in this external view - located under the carriage on the other side - is the fuel tank and other equipment for the carriage heating (fitted in the early 2000s). The lower half of the picture shows the internal arrangement - lower left is looking "up" towards Blaenau; lower right is looking "down" towards Caernarfon. In common with the other FR corridor carriages, the double seats are on the view side when traversing the Vale of Ffestiniog. Features in this carriage are the eave mounted lighting and PA system speakers.