From Festipedia, hosted by the FR Heritage Group
(Redirected from Castell Cidwm locomotive)
Jump to navigation Jump to search

No.9 is an 0-6-0DM diesel locomotive used on the Welsh Highland Railway. Originally built for use at the South Johnstone sugar mill in Queensland, Australia it arrived on the WHR in 2009 where it has been rebuilt for use on permanent way trains. 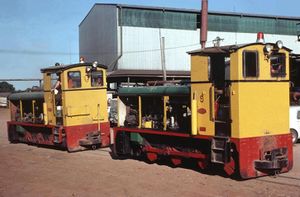 No.9 is a Baguley 0-6-0DM locomotive, builder's number 2395 of 1953, built for the Drewry Car Co Ltd, for agents Underhill Day & Co Pty Ltd, for South Johnstone Co-operative Sugar Milling Association Ltd in Queensland, Australia. The locomotive has a Gardner 8LW diesel engine derated to 132hp. During restoration at Dinas the engine was uprated to its original 150hp power output. The locomotive was built for 2ft gauge. It was South Johnstone Mill's number 9 and was used for sugar cane haulage in the Innisfail district of far north Queensland for many years.

It was purchased by a member of the Lynton & Barnstaple Trust in 2004 and shipped from Australia in 2005. It is believed to have been stored in Essex and in Somerset but by 2008 it was at the Exmoor Steam Centre in Devon.

The L&B has another of these locomotives named Pilton, but it comes from another Queensland sugar mill and has been significantly rebuilt to meet the L&B's more restricted loading gauge. 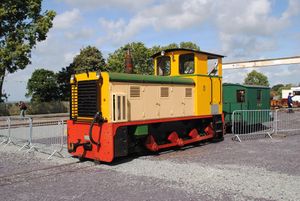 No9 at Dinas prior to a repaint.

On 29 September 2009, No.9 arrived at Dinas from the Exmoor Steam Centre in Devon.

Early reports suggested that it would be named Castell Cidwm on the WHR, however this has not (yet) occurred. Officially it is known as No.9.

The wheelsets were removed in 2010, and were turned to the correct WHR gauge (597mm from 610mm). No. 9 sat on skids in the fuel road awaiting their return. They arrived back in Dinas in June 2011. The locomotive was gradually refurbished at Dinas.

It made its first test run to Porthmadog on 1st September 2017.[1] By this time it had been repainted in the attractive South Johnstone Mill livery that it carried in the 1970s, with the exception of the side engine compartment doors which were temporarily a lighter shade than the correct safety yellow applied to it elsewhere. After arriving a Boston Lodge the yellow paintwork was completed.

Now complete, this loco is used for WHR permanent way duties and also to relieve some of the burden on Castell Caernarfon. Its large superstructure prevents it from being used on the Ffestiniog Railway. It was available for work over the winter of 2017/18 onwards.[2]