Harold is a modern 39hp Hunslet 4wDM (Builder's number 7195 of 1974) that arrived on the railway on 20 March 1993. It had been delivered new to the Yorkshire Water Authority (formerly Bradford Corporation Sewage Department) at North Bierley and did little work there – but enough to earn it the nickname Shitty or Shitty the Shunter on the FR. On arrival (and presumably cleaning), it was commissioned as Boston Lodge works shunter.

The pantograph is from the Plasser And Theurer KMX95 CM Tamper and is non working!

Following a third visit to the WHR in early 2010, Harold was delivered to Minffordd facing Blaenau, having previously faced Caernarfon. Later in the year the engine was removed following a catastrophic failure of the clutch, which resulted in parts exiting through the side of the bodywork, and into the fuel tank.

Following a period stored out of service Harold was repaired and returned to use in September 2017.[1] 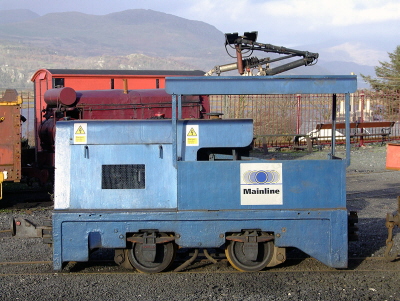