The new James Spooner will be the seventh locomotive to be built by the Festiniog Railway Company in its own workshops at Boston Lodge, and the seventh FR Double Fairlie. The building of the new locomotive was announced in 2016. It will be a replacement for Earl of Merioneth.

This locomotive takes its name from an earlier FR engine which was named after the company's first manager. 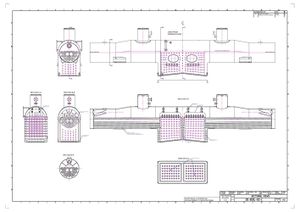 It was announced in March 2016 that Earl of Merioneth was worn out and needed replacement and that the new double engine would be named James Spooner. The power bogies for the new loco, and some cab fittings would come from Earl of Merioneth. The locomotive will feature a boiler the same as that which will replace Merddin Emrys' current boiler. This boiler will be built at Boston Lodge to a hybrid riveted/welded design. It is also planned that the locomotive will have a removable roof section, so it can be presented in the style of Merddin Emrys when new. It was originally planned that the locomotive would be complete in 2020, in time for the 150th anniversary of Little Wonder's trials of 1870. At the time of the announcement some boiler components had been delivered.[1]

In December 2016 the Ffestiniog Railway Society distributed appeal leaflets with the magazine to raise money for the new loco. This leaflet featured the first concept drawing for the loco. At the same time it was stated that the appeal would help fund new components so that (with the exception of the power bogies) parts from Earl of Merioneth would not be needed and that James Spooner would be entirely new. This would additionally make it easier to restore Earl of Merioneth in the future.[2]

The design work on the new loco is being carried out with the aid of modern 3D solid modelling techniques. This work is being carried out remotely by a volunteer and was considered around 90% complete at the end of 2017. The use of digital modelling techniques allowed the design to be easily modified as it progressed with the result that the proportions of the final design could be adjusted to be more representative of historic practice.[4] The boiler design is such that it is the same overall size as the Hunslet boilers of Earl of Merioneth and Merddin Emrys and could be used to replace the boilers of those locos. The detailed design includes the successful taper shape used in David Lloyd George but with fireboxes more like those of the Hunslet boilers which have proved less prone to broken stays. The tube layout is also the same as the Hunslet boilers which are known to steam well and be more suited to coal firing than that of David Lloyd George. This will also allow the reuse of the superheater castings from the Hunslet boilers.[5] 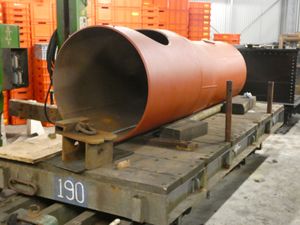 Half of the part complete boiler in the erecting shop at Boston Lodge, June 2019.

Boiler construction commenced in January 2018, with major components being welded together by a contractor in the Tanat Valley.[6] By March the cradle was under construction at Boston Lodge.[7] In February 2019 it was reported that good progress had been made with the boiler and that it was expected to be delivered to Boston Lodge later in the Spring.[8] The chimneys had also been cast by this time, and are now in the top yard awaiting eventual fitting. The first of the assembled boiler barrels was delivered to Boston Lodge in March 2019.[9] Other pre-assembled components were expected to follow shortly in readiness for final assembly at Boston Lodge.[10] On the 20th March the carrier frame was fully assembled, thus (according to tradition) turning the collection of components into a locomotive for the first time.[11] Following the mounting of the frames on the bogies attention was turned to the completion of the reverser and brake linkages whilst the absence of a boiler made access easier.[12] By October 2019 the firebox had been assembled and one of the boiler barrels attached.[13] November 2019 saw the delivery of a "flat pack" of laser cut steel parts that would form the superstructure.[14] By the end of 2019 the boiler was fully assembled with a hydraulic test expected in the new year, at this time it was still anticipated that the locomotive would be completed in 2020.[15] The building of the locomotive was delayed after the Covid-19 crisis caused all work to be stopped. Before work was stopped, the top end smokebox had been fitted and parts for the other smokebox and the tops of the domes had arrived. At this point it was expected to enter service in 2021, but further Covid related delays over the following winter mean James Spooner will now be completed at a later date not currently known.[16] By July of 2021 the boiler had completed a successful hydraulic test and work was continuing on the rest of the locomotive, in particular the process of fitting the boiler cladding had begun.[17] By the beginning of 2022 attention had turned to the construction of the tanks.[18] 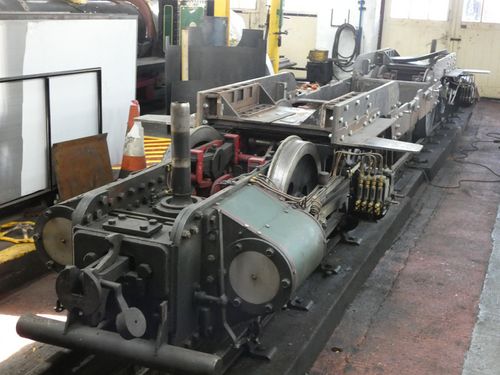 The frames in the erecting shop at Boston Lodge, June 2019. 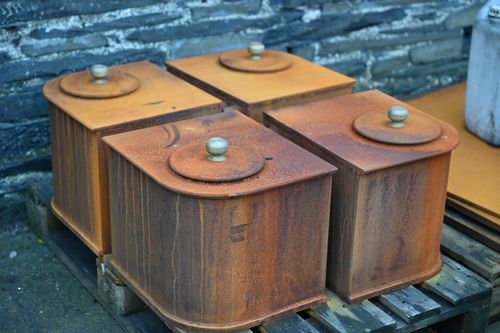