Dolgarrog is the name of a small now cabless Simplex diesel of this name, which was originally based on the Llyn Cowlyd Tramway and used for the maintenance of dams above the Conway Valley until around 1968. The history of these dams and reservoirs is closely linked to that of Henry Joseph Jack and the North Wales Power and Traction Co. Ltd, which at one time controlled the WHR, and whose headquarters were at one time at Dolgarrog, and it is of interest that the best part of a century later the connection between the WHR and the name Dolgarrog should be restored.

The name Dolgarrog derives from the village of that name, located in the Conwy Valley. (Click here for some detail on the village.)

In 1961, an order was placed by the CEGB to Motor Rail of Bedford, to replace a F. C. Hibberd & Co. loco that had been in use in the Dolgarrog / Cowlyd / Eigiau area. The result was works No. 22154 of 1962 weighing 2.5 tons with a 28-30 h.p. Dorman 2LB diesel engine which led a charmed and seldom-used existence (according to Boyd) until the tramway was taken out of use in 1968. It was removed to the CEGB Llanberis power-station contract in September 1975 in connection with cable-laying; it accompanied some ex-Dolgarrog wagons there.'[1][2]

From 1975, the Simplex was one of several small diesels that saw use installing power cables alongside the Llanberis Lake Railway.

A picture of how it looked at this time appears here.

It was latterly displayed in the Dolgarrog Power Station Museum from where it visited the Festiniog Railway for the 1995 gala.

It was put on loan to the WHR Project by Innogy in whose colours it is now painted, and it spent some time in store at Dinas. It was intended to use it from the Waunfawr construction base on Phase 2, but in the event this did not happen due to security considerations as no secure storage was available.

In May 2002 it was moved to the Phase 3 base at Rhyd Ddu North, to be used for delivering track materials to the advancing Head of Steel on that section. Secure storage was provided in a transportable container "shed".

It was moved to the FR's Glanypwll depot for a heavy overhaul in early 2006 in preparation for its use on Phase 4. Thereafter it was based at Rhyd Ddu and used extensively on Phase 4 for delivering rail, staff and tools to the head of steel. Its train comprises FR wagon 96, fitted out as a tool carrying vehicle, two ex-Imperial War Museum (Duxford) Hudson wagons rebuilt by the East Anglian Group and a braked flat wagon. At the end of 2007, the loco's shed was relocated to the siding at Hafod y Llyn to cut down journey times to and from the head of steel.

Dolgarrog had the distinction of being the first loco to travel on each new section of Phase 4 as it was completed. However, in late 2008, it lost all its engine oil and suffered a partial seizure at Hafod Ruffydd while en route to Beddgelert. Put back into running order a few months later, it failed in similar circumstances on two further occasions. The problem was eventually traced to a bad batch of big end shell bearings used in the repairs.

While the Simplex was out of action, tracklayers had to use alternative locos. Upnor Castle was used to bring the materials to site but was too heavy for use on unballasted track so Lister 56371 was hired to take the place of Dolgarrog, which was not returned to traffic until after the line was completed through to Porthmadog.

The loco is now based at Glan-y-Pwll.

Dolgarrog is not the first loco from the Llyn Cowlyd line to work on Welsh Highland construction; in 1922/3 the WHR contractors made use of an unnamed Bagnall 0-4-0ST (2080 of 1918) that had previously been used there. 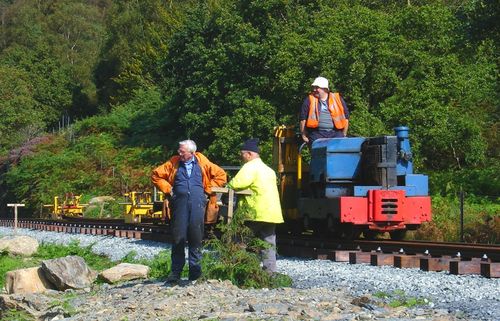