Ashover is a small diesel locomotive on the Ffestiniog Railway. Originally built for the Ashover Light Railway, it came to the FR in 1981. 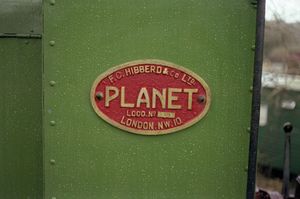 Ashover is a 50hp F. C. Hibberd & Co. “Planet″ 4wDM (4-wheeled Diesel Mechanical) locomotive (Builder′s number 3307 of 1948). It was originally supplied to the Ashover Light Railway which transported minerals from Ashover to Clay Cross in Derbyshire. It did not carry a name at that time. Ashover came to the FR in October 1981 from the East Anglian Transport Museum Society, Carlton Colville, Suffolk.[1]

Ashover came to the FR from the East Anglian Transport Museum in Carlton Colville, because it was too heavy for the Jubilee track that normally only bore a small Simplex. The loco was paid for by the Ffestiniog Railway Society East Midland Group and members of that Group, including Paul Martin, who was then employed at the Lodge, have become the locomotive′s minders. Once Ashover had arrived on the FR it became very apparent why it destroyed the Carlton Colville track — the wheels were seriously double flanged and the air brakes were nearly seized. At Boston Lodge the wheels were soon turned to remove the double flanging and to narrow the gauge slightly from 2ft. In this form it was sent to work for S&T who used it during the work to complete the railway from Tanygrisiau to Blaenau Ffestiniog.

During its spell on the Tanygrisiau to Blaenau extension works the loco was not very well and its gave up its gears one by one until it didn′t go at all, at which stage it was retired to 8 road at Boston Lodge where it languished for some time until the East Midlands Group undertook an overhaul. This turned out to be very extensive and included rebuilding the gearbox, new bearings throughout, new clutch linings, brakes overhauled and fitting a new air receiver. The electrics were upgraded to 24V and an alternator fitted instead of the dynamo. This latter change was made to ensure that it would charge its batteries whilst the engine was just ticking over. In deference to drivers′ ears a silencer was fitted instead of the original plain exhaust pipe. The most dramatic change however, was a new cab with the revolutionary new feature of allowing the driver to see where he is going!

It was during this time that the loco got the nickname Ozzy, painted on its radiator grille. The derivation is simple, writes Paul Martin, “We were doing the overhaul at about the time we were all of an age to be attending rock festivals and when Ozzy Osbourne was headlining at Donnington Festival in the East Midlands. It was an easy derivation given the Lodge′s propensity for nicknames!″

There was an unexpected problem right at the end of this rebuild. The (then) works manager was asked which oil should be used in the gearbox and, based on the bigger Planets (Conwy & Upnor Castles) he advised thick gear oil. Once the loco was started it became apparent that realised that “big″ to “small″ does not translate. He couldn′t have been more wrong and it all had to be stripped down again!

Ashover′s gearbox has three, permanently meshed, gears each of which has its own cone clutch. The gearbox runs about ⅔ full of oil which further research and mining for old records revealed should be a thin 20 grade oil which is splashed around to lubricate the gearbox. With the thin oil this gives a soft engagement to the gears as it is squeezed out of the clutch; with the thick oil the clutches slipped permanently. 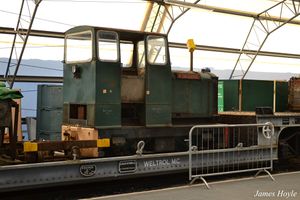 At the National Railway Museum York in 2012

Ashover worked at Boston Lodge for most of its FR career but with the arrival of Harold as Works shunter its “easy to drive″ capabilities saw it transferred, to its keeper′s dismay, to Minffordd for use by Parks and Gardens. “Sadly″, writes Paul Martin, “our worst fears were realised and it was run with no oil in the gearbox, resulting in a complete and catastrophic failure.″

The loco had the gearbox taken out and stripped down for evaluation and overhaul. It needs a new top shaft for the gearbox (a complicated component to manufacture), several new castings, new bearings and new clutch linings. A quote for the new shaft has been obtained and it was hoped to move ahead in the near future.

Ashover is taking a long time as its minders evolved into Ricket Rescue and have therefore, been distracted by looking after Blanche, including raising money for her new boiler, and then by rebuilding Merddin Emrys.

After many years of storage, Ashover was moved from Glan-y-Pwll to Minffordd in June 2012 for onward movement to a location away from the railway for restoration. By November 2012 it was at the National Railway Museum, York, for overhaul. In March 2015 it moved to Beamish where the overhaul was to continue.[2]

Ashover is somewhat over-provided with audible warning devices all of which either have some history or a tale to tell, writes Paul Martin.