From Festipedia, hosted by the FR Heritage Group
(Redirected from Jane/Sandra)
Jump to navigation Jump to search

Constructed in September 1940 by Motor Rail Ltd, Bedford. A Simplex 4 wheel diesel-mechanical locomotive, Works No. 8565, model 12428/36 Fitted with a 20 Hp. Dorman diesel engine. Reconditioned by Motor Rail in 1947 and sold for £283 to St. Albans Sand & Gravel Co. Smallford, Hertfordshire who had their number R/4 welded to the frame. They in turn, in 1966 sold it for the sum of £10 to Colonel Andrew Campbell, who resided at Dduallt Manor, and it arrived on the FR Boston Lodge, on July 15th.[1]

Kept at the Colonel's private siding, it ran on the FR by special arrangement. The superstructure appeared to be a home made job featuring chipboard. Ownership was transferred to the FR in April 1971 and the locomotive was used on the Deviation. Previously just referred to as "Campbell's No. 1", by March 1972, a repaint, including white stripes for nocturnal recognition, and it received the name "Jane", after the wife of Bunny Lewis, the Deviation works foreman. Also it received a "plate" showing "JGF1"

By 1981, it had lost its nameplate, by by 1984 had gained one with the name Sandra which is said, by Jeremy Chapling [2], to be the result of the transfer of Sandra’s fuel tank (complete with name) to Jane without a repaint. (Sandra being Dave Payne's fiancée/wife) 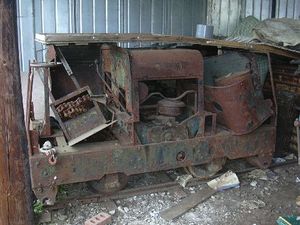 Jane at a secret location in Cambridgeshire in 2010

Jane/Sandra was sold in 2004 to a member of the WHRS East Anglian Group and now resides at a private site in Cambridgeshire. The engine started almost immediately soon after arrival, possibly for the first time since 1982, the last year it is believed to have worked on the FR.