From Festipedia, hosted by the FR Heritage Group
(Redirected from Simplex WDLR)
Jump to navigation Jump to search

The locomotive is Motor Rail "Open" design LR 2156 (Builder's number 435 of 1917). It was rebuilt in 2ft 6ins gauge by its makers as 3663 of 1924 for service in the sugar industry on the West Indian island of St Kitts. Repatriated to England, it was regauged and refurbished with a diesel engine, remaining on the FR following the FR50 celebrations in 2005.

It was used on the WHR (C) for the Superpower Weekend in September 2006 when it operated in 'top & tail' mode with Palmerston on Phase 4 demonstration trains south from Rhyd Ddu to Pont Cae'r Gors.

LR 2156 left Minffordd on a lorry on 12 March 2008 with what was thought to be a damaged cylinder liner or piston, and moved to Rowsley near Matlock for repairs. It was expected to return to the FR later in the year after an appearance at the Peak Railway War Time Gala Weekend.

The loco eventually returned to Boston Lodge in December 2010 for further repairs to be undertaken. It then became a long-term resident and was listed as a passenger locomotive in the FR rule book. 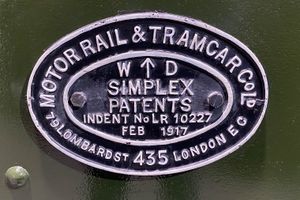