Charles, the elder brother of Linda and Blanche, was built by the Hunslet Engine Company, Leeds in 1882 (works No. 283) and was the first of the Penrhyn main line Hunslets. The design was reputedly influenced by a batch of Darjeeling A Class locos subcontracted to Hunslet from Sharp Stewart. Charles is named after Charles Douglas-Pennant (1877-1914).

Charles was offered to the Festiniog Railway for £500 at the same time as Linda and Blanche were purchased, however the offer was declined as the boiler had been condemned.[1][2]

Charles was later donated to the National Trust. Unaltered from final Penrhyn condition, he is now a static exhibit at the Penrhyn Castle Industrial Railway Museum. The loco made his only excursion to date from Penrhyn Castle to the FR Hunslet Hundred event in 1993, when he was displayed at Boston Lodge. While there, he was taken over the pit and carefully inspected. 'Needs a new firebox,' said the inspector, 'but otherwise he's in quite good condition and may well run again one day.' It is rather hoped that that day is long distant, as he is the only one of the Penrhyn mainline trio to remain in original condition and there is no suitable work for him as he stands. But he is a fine fellow. 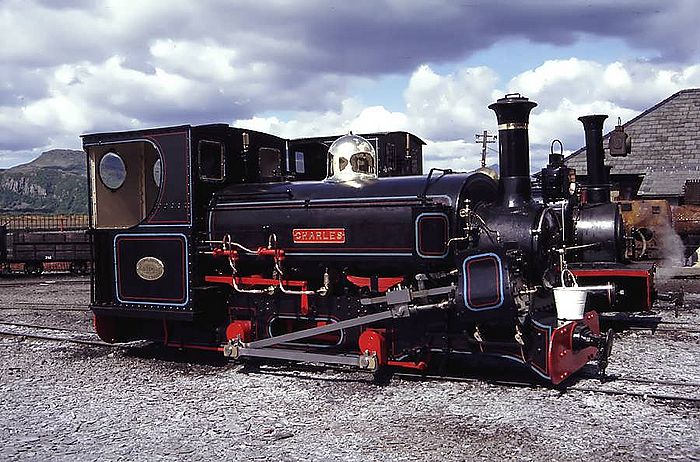