Winifred is an ex-Penrhyn Quarry Hunslet (364 of 1885) that returned to the UK following a number of years stored in America. It is now based on the Bala Lake Railway in full working order. Winifred along with other ex Penrhyn locomotives paid a visit to the Welsh Highland Railway for the 2012 Quarry Power Weekend event.

At this stage it was not yet restored to working order and was still Penrhyn gauge so was placed on a flat wagon in order to be moved about the Welsh Highland Railway as can bee seen in the image of Winifred at Dinas. On the 15th September Winifred took part in the cavalcade which ran from Dinas to Beddgelert, with the train terminating there each locomotive would then work the "S" bends around Beddgelert with Winifred being pushed by Hugh Napier.

It visited the Ffestiniog Railway for a series of photo charters in Autumn 2015. At this time it was still wearing its original Penrhyn livery after its first preservation overhaul but before receiving a new coat of paint (see photo of loco on Vale of Rheidol).

Winifred returned to the FR in 2018 for Hunslet 125 having had a new coat of paint applied, working short trains in and around Porthmadog. 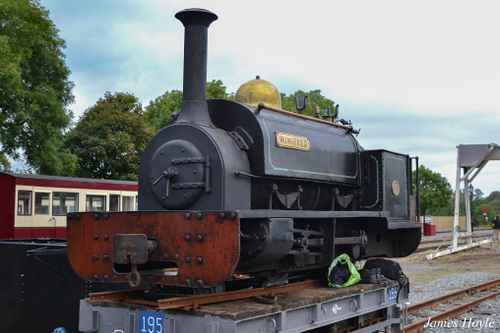