For the new locomotive which is due to be constructed by 2020, please see James Spooner II.

James Spooner was the second Double Fairlie to be built for the Festiniog Railway. It was supplied by the Avonside Engine Company of Bristol. Featuring a number of design improvements over the first FR Fairlie, Little Wonder, this locomotive set the design pattern for the future FR double engines.

Gradually rebuilt to take account of improvements brought in on subsequent double engines, it continued to work on the FR until the late 1920s. An attempt to repair the boiler failed and it was later condemned. The major components were mostly scrapped but some of the locomotive survived around Boston Lodge with various parts being incorporated as spares into the other locomotives. 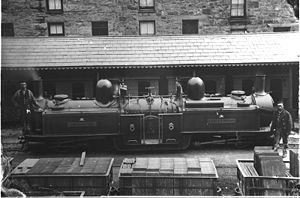 James Spooner at Duffws circa 1880 - Note the Type 1b/2 quarrymen's carriages in their shed behind.

James Spooner was supplied by the Avonside Engine Company of Bristol (works Nos. 929/930 - Note it has two works number as it is a double engine) to the design of George Percival Spooner, James Spooner's grandson. The locomotive featured a number of design improvements over Little Wonder, the first FR Fairlie. These included a revised bogie design that better accounted for the weight of the cylinders and a more conventional firebox arrangement. The design of this locomotive formed the template for the future FR Fairlies. As built it had an open cab and prominent bells mounted on the forward part of the boiler at each end. The bells were mounted atop sandpots.

It began work in December 1872. It was retubed in November 1874 and reproved at 200lb (working pressure 140lbs). In June 1875 it came off the line at Tanygrisiau and was repaired in a day. The coal bunkers had flanges put round them in August. In September it came in for repairs again after running over a pig at Cei Mawr! Two new sandpots were put on the engine's footplate in November 1875. The year 1876 was slightly less eventful with a frame beginning to crack in August and then breaking in October. The repairs took until April 1877 to complete. It received new rods in 1878 and two new whistles. A pair of new lubricators was fitted on top of the smokeboxes in April 1879. The second pair of sandpots were added in November 1880 thus dating the photograph.

In 1882 the wheels had three new oval holes put in them for oiling in front & examining trimming, the two original round holes were plugged with cast iron.At this time also, 1 ton weights were put on the tanks. In 1883/4 lubrication was provided for the flanges of the driving wheels. The old sandpots were taken off the boiler barrel in October 1885 and two new safety valves fitted. A full cab was fitted in February 1887, the four small handrails on the smokeboxes for sanding and 2 new displacement lubricators. 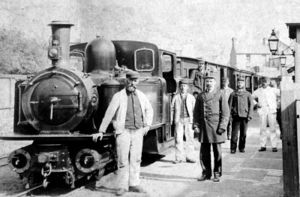 James Spooner at Duffws in the early 1890s

However the boiler was wearing out, and when it was dismantled for examination in February 1888 was found to be in a very bad condition. Tenders were sought for a new boiler and it was ordered in August 1888 (from Neilson & Co, Glasgow), finally arriving in February 1889. The boiler gave problems because the rude way that the Boiler was made & put together...causing the fitting of machinery & connections to it difficult & tedious. The locomotive finally emerged in September 1889 with new smoke boxes and new capped chimneys also. There were leaks from the foundation ring within 6 months and leaking tubes needed referruling from 1891. In December 1892 the vacuum brake was fitted on the loco.

Around this time a new cab and tanks were fitted of the same style as those on Merddin Emrys and Livingston Thompson. These were taller than the original tanks.

By 1895 the boiler required attention four times in the year. In July 1897, Palmerston collided with James Spooner at Glan y Pwll - an accident blamed by the Board of Trade on the signalman. The damage being to the buffer and the bogie centres being badly bent.The boiler was finally retubed in March 1901 with 200 brass tubes from Muntz Metal Co Ltd.The loco lasted until 1904 in this form, being withdrawn on December 17th of that year. 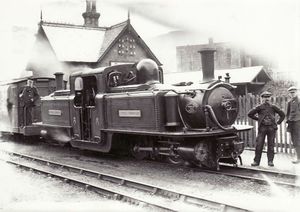 James Spooner at Duffws in 1911

A new boiler was ordered in February 1906 but did not arrive until September 1907. It was a steel wagon top boiler from the Vulcan Foundry, costing £510, arrived at Boston Lodge and was fitted immediately, together with new smokeboxes, cylinders, two new injectors and the previous cab and tanks fitted on. The loco was completed in December 1907. As a cost saving, of the 222 red metal tubes, only 19 were new and the rest were second hand from Livingston Thompson.

The new cylinders were cast from the pattern used for Livingston Thompson and the new wagon top boiler was also similar to the one used on that loco and Merddin Emrys. As a result James Spooner was (apart form the shorter length and shorter wheelbase bogies) now very similar to the two later locomotives. 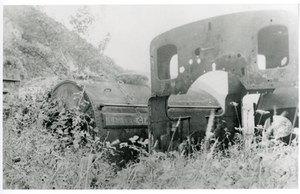 1920s-Present: Run down, scrapping and salvaging of parts[edit source]

It had several overhauls in the 1920s in December 1924, March 1925, April 1926 and finally September 1927 to April 1928. It was withdrawn for the last time in December 1928 and a protracted overhaul of the boiler started, that probably ended in failure in 1930. After this the loco remained dismantled and was finally condemned in 1933. Part of the problem was that, unlike the first two boilers, the third one did not have the rubbing plates that protected the boiler plate from rubbing on the cradles as the boiler expanded whilst it warmed up. This led to the boiler plate becoming worn through. An unsuccessful attempt was made to to repair the boiler using early electric welding techniques.

A photograph exists of the boiler at Boston Lodge Halt from c1935. The boiler was scrapped in 1935 and some remains of the locomotive were scrapped in 1937. However, the side tanks and cab remained in Glan y Môr into the 1950s. The wheels have survived to the present day. They were used under Merddin Emrys from 1934 to 1972, and are currently under Livingston Thompson at the National Railway Museum. Much of the motion also survived and is also now on Livingston Thompson.

Reuse of the name[edit source]

In March 2016 it was announced that a new locomotive carrying the name James Spooner and the number eight would be built. The design for the new locomotive features some design cues from the original, including the distinctive bells and whistles.