Carriage 100 was a first class observation, saloon and guards van from the Centenary stock series. 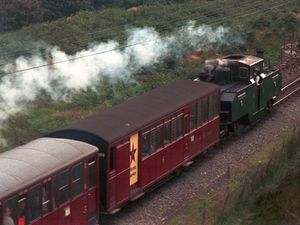 Carriage 100 on a down train leaving Dduallt behind Earl of Merioneth, 1986

This carriage, the first Carriage 100, carried its number in celebration of the Festiniog Railway Passenger Centenary (1865-1965). Its introduction established a new standard for FR first class accommodation. The observation saloon had ten well upholstered pedestal mounted swivel chairs with typical FR limited clearances! The other saloon had eight ex-Pullman chairs with a table to each pair, and both saloons were fitted with crested carpets with deep underlay. Access to each saloon was via a vestibule fitted with deep fibre matting. The brake van section had sliding doors and held two large prams or several bicycles.

The Centenary stock (Nos. 100 to 106) were the first new coaches built to the higher loading gauge permitted following the abandonment of the old Moelwyn tunnel. They were designed internally by the FR Co. and constructed at Boston Lodge from wooden body sections manufactured by H.L.Watson, Ltd., Birkenhead. They were mounted on steel underframes, running gear and bogies made at Boston Lodge. The profile was based on that of the restored former Lynton and Barnstaple Carriage 14 so that these coaches are known on the railway as "The Barns".

In the above left picture the 1980s livery of all over maroon is shown, with the sliding door featuring the FR variant of the Red Star logo indicating that Red Star parcels could be sent and received over FR services. 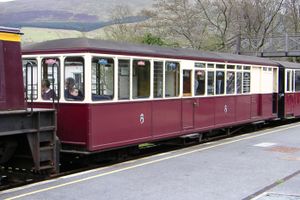 Its time as a passenger vehicle came to an end in 2005, and it was transferred to departmental stock and renumbered Carriage 1000. For further detail see here.