From Festipedia, hosted by the FR Heritage Group
(Redirected from Bodysgallen)
Jump to navigation Jump to search

Carriage 2115, named Bodysgallen, is a Pullman carriage built for use on the Welsh Highland Railway. 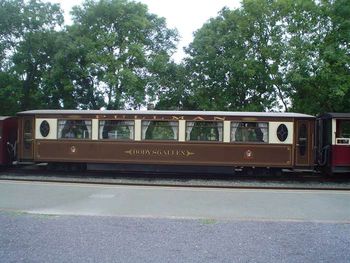 A sixth carriage was built by Winson Engineering in Daventry in 1998, originally fitted with bogies imported from South Africa. It was fitted out as a luxury Pullman-style vehicle, with sponsorship from the owner of the hotel of the same name in the Tudor mansion near Llandudno. The marquetry panels at the ends of the saloon, the oval windows on the doors of the vehicle and of the butler's pantries, are worth noting. It seats 20 passengers, and it went into regular service in 2000.

While the concept is quite magnificent, the original structural workmanship needed upgrading at Boston Lodge because the carriage hogged (see why under No. 2040). The second picture below shows the hogging - i.e. the middle of the carriage rides higher than the ends. In late 2002 following the opening of the extension to Waunfawr, the carriage underwent a refurbishment. The table mounted lamps were removed as they took up a lot of the space on the tables, the seats modified to raise their height using brass blocks and the tables lowered [2].

In 2010 its already luxurious interior was repaired and upgraded at Boston Lodge.

The exterior view shows the Pullman brown livery. It is notable that the running number is not shown on the side of this vehicle - only its name. The interior view shows the ceiling details with light fittings, PA speakers mounted down the centre of the carriage with brass grilles. Diesel fired hot air heating is fitted. The left bottom picture shows the up direction (to Blaenau Ffestiniog) view, and the down direction (to Caernarfon). In January 2006 the reddish-brown carpet in the passenger compartment and the matting in the vestibules were replaced with FR standard blue "First Class" carpeting. New brass thresholds were also fitted at the four entry doors. As of the return to service on 11 February 2006, pets were prohibited from 2115.

In December 2007 the SAR bogies were replaced by a pair of Romanian bogies which had been acquired for new carriages, but these were not entirely satisfactory and they were replaced in Spring 2008 by the bogies from Carriage 2060 which had been rebuilt at Boston Lodge with new stretchers which was a considerable improvement.

2115 spent the winter of 2009/2010 at Boston Lodge for a major upgrade of the exterior including new panelling, doors and windows. The original mid-brown Pullman colour has been retained at the request of the sponsor (though doors are now white), so it is a different colour from 2100. At some point the electrical connections were removed from the Caernarfon end meaning it had to be coupled at the end of a train.

Following the completion of observation car 2152, Bodysgallen was removed from the main sets for some attention in the carriage works to allow it to be coupled in the middle of a train. It is in need of an overhaul, but the timings of this are still under consideration due to the cost involved. Bodysgallen is still available for use in reserve, able to be added to either set to provide additional First Class accommodation when required (for example during periods of high demand or when there are special groups). It is no longer used in daily service as, after 20 years of intensive use, the interior is in such a condition that it could very quickly fall below the standard expected of first class on the F&WHR.[3] 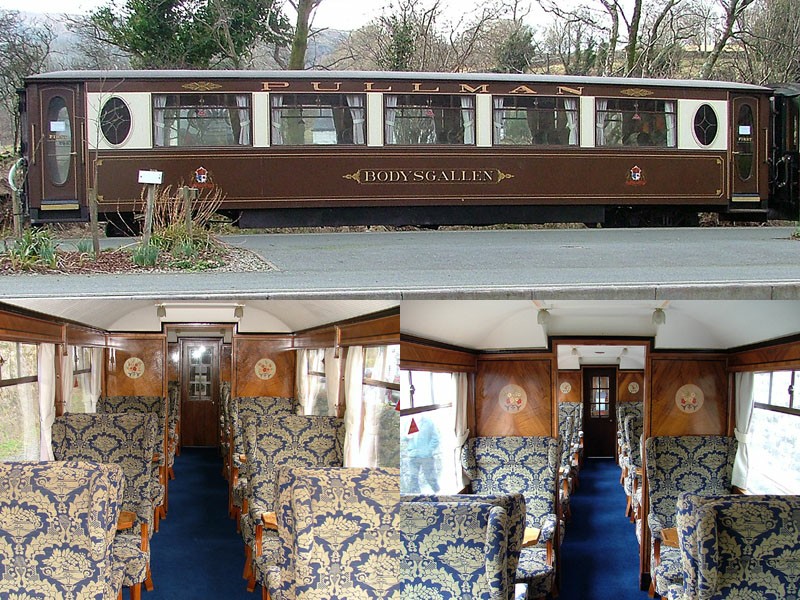