Carriage 2041 was a WHR third class saloon carriage. It was rebuilt as brake carriage and renumbered 2091.

Delivered new to Dinas in September 1997. Runs on bogies imported from South Africa. Built by Winson Engineering in Daventry. The picture shows the characteristic hogging caused by the unfortunate modification of the original design.

This was the last carriage of the September 1997 delivery to still be in original condition, with the red and cream doors and large size numerals on the side. The interior views show the matchboarded ceiling and sides, with light fittings and PA speakers mounted down the centre of the carriage. Diesel fired hot air heating fitted. The left bottom picture shows the up direction (to Blaenau Ffestiniog) view, and the bottom right picture shows the down direction (to Caernarfon). All the 2000 series carriages have the double seats on the left looking in the up direction.

Between June and September 2007 this carriage was sent to Boston Lodge for refurbishment and upgrading to bring it closer to the style of the more recently built carriages. This saw the external panelling and beading rearranged and a repaint with fully cream doors with a red surround.

2041 was withdrawn in October 2016 for conversion to a Third-brake with toilet, similar to Carriage 2090. The rebuilt carriage was renumbered 2091. 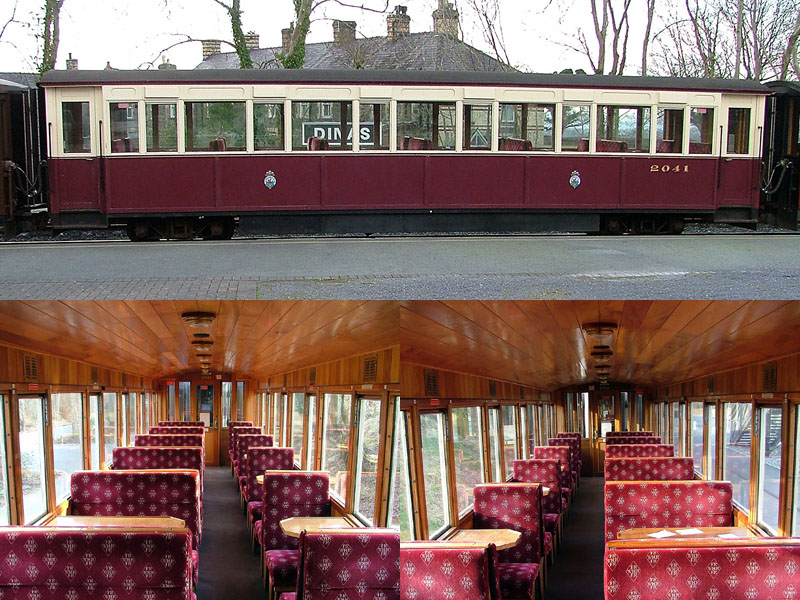 Exterior and Interior Views of Carriage 2041