For the current Superbarn of the same number , see Carriage 121

Carriage 121 was an all third saloon carriage in the Tin Car series.

Carriage 121 was an "all steel" coach built by FR Co. at Boston Lodge in 1981. The underframe was originally from an Isle of Man Railway "Pairs" coach.

It was refitted in 1989/90 for use in the new push pull train. It gained pattern 88 bogies, larger "Beclawat" windows, gas fired heating and the necessary pipes and cable for push pull operation. It was fitted with several types of seats as a trial for new seating type. Initially painted in the "Upside down" livery of Green and Cream, it was subsequently fitted with the new style red third class seats and painted in the push-pull livery of Green and Cream. The heating was removed in 2003(??) and it was painted in current livery of Cream and Red.

This carriage had easily removeable seats and was therefore used as the Disco carriage for staff party trains with the seats being removed one afternoon, the disco built for the evening event and then the seats replaced early the next morning. 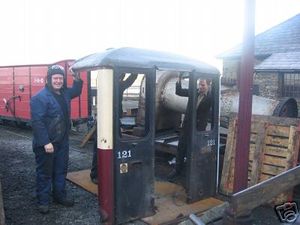 This photo accompanied the ebay listing

Unfortunately, it was destined to be the shortest lived of the new carriages.

Withdrawn from service in the Autumn of 2005. It was intended to modify the steel body for its new role but this was found to be impractical after the work had started. Thus the body was removed and the underframe and bogies were used in the first of the new Service Cars, Carriage 124.

When the body was removed from the underframe, one of the ends was removed and sold on eBay in March 2006 to raise funds for tools at Boston Lodge. The following text and image was taken from the eBay listing:

"Ffestiniog Railway Carriage End Vestibule. Recently removed from carriage No121 which is undergoing a heavy overhaul this carriage end would make a fine addition to any enthusiasts garden. This is a unique opportunity to aquire a piece of Ffestiniog history. (The other end vestibule was damaged on removal and cut for scrap). Proceeds go the Boston Lodge Tool fund. Buyer collects but we may be able to assist with transport by separate agreement.:

During March 2010 it was announced that the FR Society was to fund a new carriage; a twin to newly completed Carriage 103 which would carry the number 121. Fabrication of new bogies then began. Details of this Carriage are now included at Carriage 121.