One of the original NWNGR Pickering brakes of 1907

The original vehicle was one of a pair (Nos. 4 & 5) built in 1907 by the R.Y. Pickering & Co. Ltd for the North Wales Narrow Gauge Railways. They were brake composite carriages with one first class compartment and two third class compartments. It is believed they were constructed to replace the Cleminson Brake carriages of 1877.

As with the other NWNGR stock they were transferred to the new Welsh Highland Railway. The coaches were cut down in 1923 to fit the restricted Ffestiniog Railway loading gauge. This was done by cutting down the sides above the windows. Renumbered into the WHR/FR scheme, it appears that number 4 became Van 8 and number 5 Van 9.

Both were broken up in 1942 following the closure of the Welsh Highland Railway. 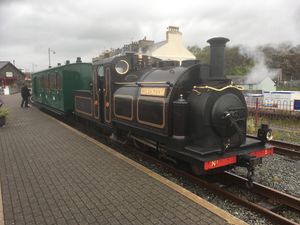 Van 8 at Harbour Station with Welsh Pony before a test run to Minffordd. 23rd May 2021.

Construction of a replica carriage for the WHHR started in late 2019 following a generous donation from a sponsor. The construction was put to tender and Boston Lodge successfully bid for the contract. The carriage has been constructed to the dimensions of the Pickering Brake as built and includes replica ventilators on the roof. The design has been slightly modified from a composite to an all third as what would have been the first class compartment in the original carriage has been adapted to be a wheelchair accessible compartment with fold away seating and hidden opening doors through to the guards compartment, which enable a wheelchair to board through the guards' double doors.

The finished carriage has been turned out in WHR 1920s period green and numbered 8. It was delivered by rail from Boston Lodge to Pen-y-mount by Welsh Pony on Sunday 23rd May 2021, after completing two test runs from Harbour Station to Minffordd.