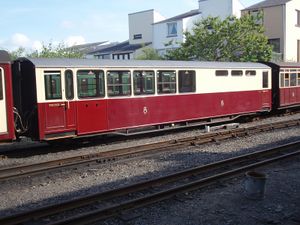 Built in 1991 as part of the Ffestiniog Railway's "Increased Capacity" (INCA) programme, "The Carnforths" are three carriages built by Carnforth Railway Restoration & Engineering Services (hence the nickname), with running gear, electrical services, finishing and painting completed by the FR Co. at Boston Lodge. They have aluminium bodies on steel underframes, with particular care taken to insulate the body from the underframe, thereby reducing the corrosion problems encountered with the Tin Cars. They were amongst the first FR carriages to be fitted with heating, and formed the backbone of the new C Set, which became main set used during the winter. They also featured twin-pipe vacuum braking and Push Pull apparatus from new.

It was confirmed in October 2015 that the Carnforths would see a few more years of service.