The Tin Cars, formerly known as Domeliners are a type of post-preservation carriage stock formerly used on the F&WHR. None remain in passenger use; however, Carriage 111 remains in service as a departmental carriage. 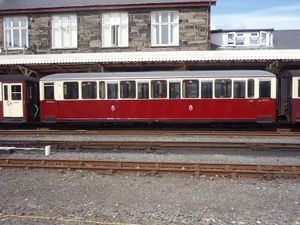 Carriage 120, a typical example of a Tin Car.

Known latterly as the Tin Cars but when new as Domeliners from the domed ends to their roofs, these carriages were built in the late 1970s and 1980s on underframes purchased from the Isle of Man Railway. These underframes had been built by the Metropolitan Amalgamated Railway Carriage & Wagon Company (later the Metropolitan Carriage Wagon & Finance Company) at various dates from 1909 to 1926 to allow the IoMR to create 26 'new' bogie carriages by mounting two old 4-wheeled carriage bodies on each one. In the 1960s the life-expired bodies were removed from 11 of them (Nos.F51-53, 55-6, 58-61, 69 & 72) so that the underframes could be used as 'runners' for container traffic. They were unofficially numbered R1 to R10 with one left un-numbered. When the containerisation venture failed they were surplus to requirements and eventually sold to a scrap dealer, from whom 10 were bought by the FR, their dimensions being very close to the then standard for FR underframes. The truss rods were removed from each of the frames used for carriage construction by the FR to allow for the use of bogies with smaller wheels than had been fitted in the IoM. Not all have been used for FR carriages, two having been put into service as bogie flat wagons Nos 56 and 57 (ex-IOMR R4 and R2), and two have not (so far) been used.

The only remaining operational carriage in this series is:

In early 2006 during conversion work on Tin Car carriage number 121 from an all-third to the first of the new Buffet / Toilet / Guard's Service Cars, it was found that the old steel bodywork was in very poor condition and the decision was taken in February to scrap the bodywork and build the new body of wood rather than metal. The resulting new design is very similar to the traditional Barn design of Coaches 100 - 107, but differs in that it is mounted on the ex-Isle of Man Railway underframe formerly under the Tin Car. The new vehicle has, therefore, become a Barn, and is numbered Carriage 124. It was thought that the facility to mount Barn design bodies on IOMR underframes may be used again in the future as the railway has several of these frames. However experience has shown that it is easier to weld up new bespoke frames than to modify the old ones for use under the more modern carriage designs now being built, perticularly in view of the inset doors of the 'Superbarn' design.

Another drawback of the Domeliner design was that the domed ends restricted the height of the end gangway door.

As part of a scheme to improve passenger comfort on the Ffestiniog and bring facilities closer to those available on the WHR the remaining tin cars were withdrawn and replaced by new "Superbarns". Unlike 121 the remaining carriages were not scrapped, but were sold to other railways, or (in the case of 111) transferred to departmental use.

Withdrawn carriages in this series are: