This is the second carriage 11 of the revival era. The first was the Brown Marshalls brake van now numbered Van 4 which is currently carrying the number 11 after restoration to its 1960s appearance.

Carriage 11, known as The Flying Bench, is one of the Ffestiniog Railway's original carriages from 1864. It was built as a fully open carriage, subsequently fitted with a canopy and aprons. It was later given enclosed body work similar to the other Bug Boxes. After the later body work collapsed in the 1950s the opportunity was taken to restore it to original condition. A later restoration saw the recreation of the canopy and aprons.

For good reason, it has become known as the Flying Bench. As a bug box without a shell it resembles a bench on wheels. Contrary to its looks it actually rides very well and gives (at least from one side!) an unparalleled view of the line.

The vehicle now known as the Flying Bench was built by Brown, Marshall & Co of Adderley Park Birmingham. It was a single compartment open carriage with knifeboard seating and a first class of capacity six each side. It is believed to have been part of the first batch of narrow gauge passenger coaches built in the world for public service (along with Nos. 2, 3, 4 and 5), to designs assumed to have been made by C.E. Spooner.

This was one of two open carriages from the original batch. This vehicle was numbered 12 and classified as first class, with padded seat backs and cushions while the other was numbered 13 and had plain wooden seating. They had leather aprons to protect passengers legs and keep them in the vehicle. By 1871 a canvas awning on a wrought iron frame to provide some protection from the elements had been added. 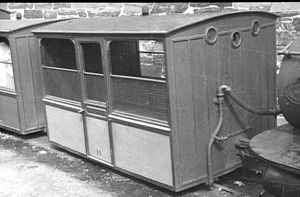 Later in the 19th Century both open carriages were rebuilt as enclosed observation carriages. The side windows were completely glazed with a single pane of glass either side of the central door, which had a glazed droplight. It does not take much imagination to see that the glazing would have acted like a greenhouse in any sort of sunlight. By the time of Wheeler's photo the "portholes" had been glazed (or more likely had fine mesh fitted to stop midges and flies) but originally they had sliding ventilators which were in evidence to the end.

Some time soon after the Great War the glazing was removed and substituted by the wire mesh and rails, seen in the photo. The small board in the waist panel of the door bears the legend "Observation Car" and was applied when the carriages were first enclosed. Both had their numbers reduced by 1 in the 1930s to become 11 and 12. 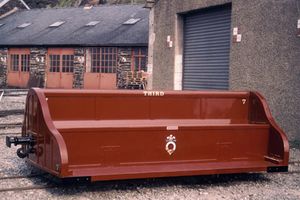 Outside Boston Lodge just after the 1991 restoration.

Restorations and rebuilds in the revival era[edit source]

Both survived into the revival era in poor condition. Number 12 (originally 13) was scrapped in 1958 whilst number 11 (originally 12) was placed into store after the late 19th Century bodywork collapsed during 1958 whilst the derelict carriage was being moved at Boston Lodge. At this time the carriage was renumbered 7 in sequence with the other surviving bug boxes. A rebuild in 1968 saw it restored to the original, fully open, condition and outshopped in "Cherry Red", chosen by then General Manager Allan Garraway. The original, spray-painted, was somewhat more garish than that later used. Later, it received the standard red as carried by other carriages. The fully open condition of the carriage meant it was now unsuitable for use in passenger trains.

A further rebuild was carried out in 1991 and permission was obtained from HMRI to run it on special occasions, provided a competent person was in charge.

In 2007/8 a further refurbishment, sponsored by the Festiniog Railway Heritage Group was commenced. In preparation for this the Flying Bench was moved from Minffordd to Boston Lodge on 14 April 2007. The modifications included installing a replica of the iron frame, canvas awning and leather aprons. These were based on research completed by the heritage group into how the frame fitted and the cover was tensioned, including the construction of a working model. Repainting in Victorian livery completed the 19th century aura. The work was completed in September 2009 and the carriage was unveiled (perhaps appropriately) during the Quirks & Curiosities event in May 2010. It now carries the number 11 on the centre of the seat back.

The Bench is not used for normal passenger operations and is therefore only rarely seen. It is required to have a competent member of staff in charge when carrying passengers which means it is normally only used on special occasions (such as the annual Victorian Weekend). The staff member is responsible for loading the the carriage and then "tucking in" the passengers by fastening the aprons over their legs. There is a small brake lever (similar to a communication cord) available to alert the train crew if something goes wrong.

As an unbraked (through piped) vehicle the bench must be marshalled in the middle of a train with braked vehicles either side. It also retains its original buffer couplings which further restricts where it can be coupled in a train as not all other couplings are compatible.