The Barns, originally known as the Centenary Stock, are a class of carriages on the F&WHR. They encompass three main "sub-classes": the Original Barns, the Later Barns, and the Super Barns (known in publicity materials as Super Saloons). They are the largest class of post-preservation carriages and continue to provide the backbone of FR passenger services, and include the first carriage built for the post-preservation FR. 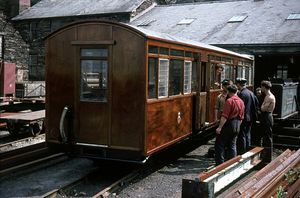 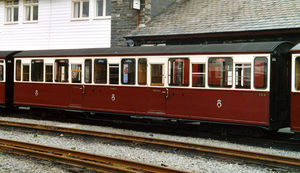 Carriage 104, first of the original Barns as later modified.

Following the abandonment of the old route from Dduallt to Tanygrisiau via the Old Moelwyn Tunnel due to the Llyn Ystradau reservoir, and the increased height of the Rhiw Plas bridge arranged by the then FR Co. Secretary Francis Wayne, the major restrictions to the loading gauge were removed. For nearly 100 years, these two obstacles had limited the dimensions of engines, wagons, and carriages. Even though there were still restrictions elsewhere, notably Garnedd Tunnel, the way was now clear to consider a somewhat larger profile for rolling stock.

By the early 1960s, the management realised that with passenger growth the existing carriage stock, even including those yet to be returned to service, would be inadequate, and additional carriages would be needed. To this end, a new carriage design, with noticeably more headroom, was drawn up and the FR Co. began construction of a series of modern wooden-bodied carriages at Boston Lodge, using steel frames made there and wooden body components manufactured by a company in Birkenhead, H. L. Watson & Co. The design had been prepared by Fred Boughey, a Boston Lodge volunteer who, at the time, still worked as a lecturer at a Technical College in Birkenhead, and he was able to oversee the manufacture of the components. Later Barns were built entirely at Boston Lodge. The design for this new Centenary Stock was for a significantly larger carriage than all the previous designs, height restrictions having been eased by the above changes. The profile was based on that of the restored former Lynton and Barnstaple Carriage 14 and this is thought by some to explain the affectionate nickname, "The Barns", though others say it is merely due to the spacious interiors. Either way it is not a derogatory term. The alternative name Centenary Stock comes from the fact they were built 100 years on from the first carriages on the line. That name is rarely used these days but is the reason for the numbering of the original Carriage 100. 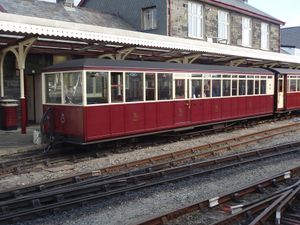 Carriage 100, an example of the later series of Barns.

Subsequent new carriage builds in the 1970s, 80s and 90s favoured steel and/or aluminium bodywork, apart from the replacement bodies for old Ashbury coaches 22 and 26, which were of wooden construction in Barn style and profile but shorter, and retaining the non-corridor seven-compartment layout of the originals. These were followed by more metal-bodied coaches, but a return to the wooden "Barn" style of construction came in 2002 when Carriage 106 required a new body. This led on to the construction of the entirely new Carriage 107, which was identical to 106 and similar to the original form of the first of the series, 104.

Other coaches followed, continuing the series and developing the style. First a new Observation car, Carriage 102, with Guard's compartment. Then in 2006 the original 100 was taken out of operational use, having served several seasons in the second set on the WHR and reached the end of its economic life. Rather than being immediately dismantled to release the underframe for another new build the carriage was renumbered 1000 and transferred to departmental stock to serve as a mess and riding vehicle for construction staff on Phase 4 of the WHR. The FR pattern bogies were released and returned to Boston Lodge for overhaul, being replaced under 1000 by a pair of SAR diamond frame pattern, as used on other WHR stock, except that this pair had flats on the wheels. 1000 was eventually withdrawn and dismantled in 2010. The number 100 was transferred to a new Barn Obs, of updated design, similar to 102 but without Guard's compartment. This function was to be accommodated in the new Service Car, Carriage 124, along with the Buffet and toilet. These facilities left no room for any passenger seating in the Service Car. 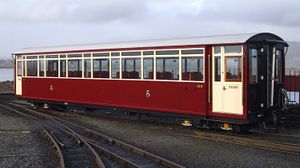 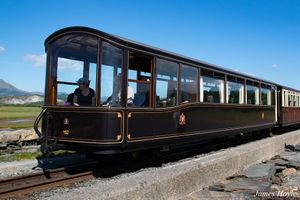 Following withdrawal of the original 103, a new carriage was authorised to take that number, but it was not to be a replacement buffet car (the new 124 meeting that need) but an improved Saloon, with larger doors, inset at the extreme ends, unlike the previous Saloons which had doors at one-third and two-thirds of the length. The change allowed easier access, and greater interior width in the main body of the carriage. The seat spacing is greater than in previous FR carriages to give more leg room. The length and width are greater than any previous FR passenger vehicle and therefore the doors are inset in relation to the rest of the body. One end has double doors and a seat which can be collapsed to allow a wheelchair access to a table. Following the success of this design, a significant number of these carriages have been constructed and more are on the way, being suitable for FR and WHR use and offering greater comfort and wheelchair access.

From the new 119 onwards, the alternating large and small windows have been replaced by larger windows each the size of a seating bay, as on the latest WHR carriages 2046, 2047 and 2048, to maximize appreciation of the views. The latest Service Car (Carriage 125) was also built in the Superbarn style.

These carriages were referred to as Super Barns during construction of the first four, but since the launch of the new 119 the Company prefers to call them 'Super Saloons' for publicity and other official purposes. The original name remains in common use around the Railway and its supporters. For historical reasons both terms may be found elsewhere in this Wiki.

The Pullman observation cars are built to match the Super Barns, but unlike them have internal stainless-steel framing for the wooden bodywork - a constructional feature used also on the WHR carriages. They also have very large curved windows at the lower ends developed from the style of the first WHR observation car Glaslyn. Carriage 150 is so numbered to commemorate its building 150 years after the inauguration of passenger services.

An interesting article by Fred Boughey in FRM 32[1] gives some background to the original design. Saloon stock was preferred as it was much easier to accommodate family and other groups than in compartment stock. Doors at the extreme ends were considered for the very first Barns in 1964, but turned down by the Traffic Department on the grounds that some passengers would be a long way from a door, inconvenient both for loading and in the event of an accident. These objections had clearly been overcome by 1972 when Carriage 116, the first metal-bodied prototype, was built with end doors, to be followed by the other metal saloons.

The article does not mention the word "Barn" - the nickname may not have been in use at the time.

Due to their more robust design compared to the newer "Tin Cars", the Barns are being retained in service with minor modifications to address some of the issues associated with them.