From Festipedia, hosted by the FR Heritage Group
(Redirected from Carriage 101)
Jump to navigation Jump to search

Carriage 101 was a first class observation, saloon and guards van from the Centenary stock series.

In the 1960s the Festiniog Railway began construction of a series of modern wooden bodied coaches at Boston Lodge. The profile was based on that of the restored former Lynton and Barnstaple Carriage 14 hence these coaches are known on the railway as "The Barns".

The inset 1986 view shows the carriage fitted with drop lights. At this time sliding doors were still fitted. However during the 1990s, the internal partitions in the guard's area were removed and double doors with windows replaced the sliding doors. The livery is the then-standard all-over maroon, large "1" transfer on the door and "Observation Carriage" transfers on the side. The bracket for the reservation board is also visible.

During this period, although not visible in this shot, the Ffestiniog Railway was part of the Red Star parcels network and a maroon star was painted on the sliding door in the guards area. 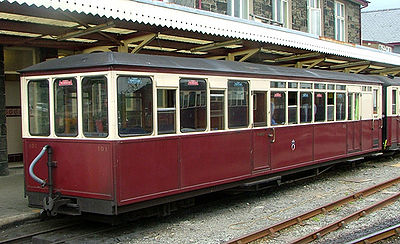 In this view, 101 is shown in the maroon and cream "Mountain Prince" livery first applied in 1987. "First" transfers are applied to the doors and the bracket for the reservation board has been removed. The double doors in the guard's area are visible. 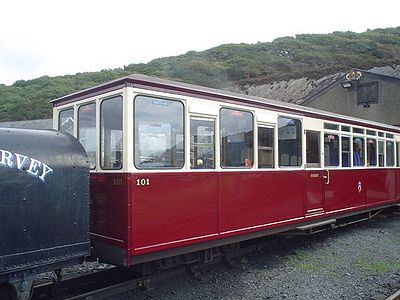 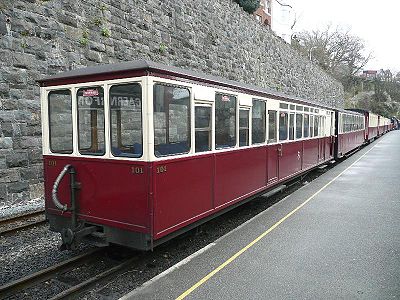 In use on normal service on the WHR(C)

Withdrawn August 2005 following the introduction of Carriage 102. Repainted September 2005, and re-entered traffic on the WHR(C) in April 2006, having been moved to Dinas on 4th Fabruary 2006.

At the beginning of the 2007 season the seating accommodation was downgraded to Third Class.

After the arrival of a dedicated WHR Observation Carriage; Carriage 2100 in February 2009, 101 was no longer used on WHR service trains. Instead it was occasionally used when required as extra coaching stock for route learning and other special trains to Hafod-y-Llyn and later to Pont Croesor. Unlike the original carriage 100 (which became Carriage 1000) it was not transferred to departmental stock.

In early November 2009 101 was moved by rail back to the FR, where the refurbishment of the interior began in order to use within FR trains once again.

It was decided that in order to retain the number 101 for use with a new Observation carriage at some point, the current 101 should be renumbered to Carriage 123. It has been fully refurbished and has entered service. For further details, see Carriage 123