From Festipedia, hosted by the FR Heritage Group
(Redirected from WHRL Coach No. 9)
Jump to navigation Jump to search

This vehicle was one of a pair (Nos. 9 & 10) built in 1893 by the Ashbury Carriage and Iron Company for the North Wales Narrow Gauge Railways (later the Welsh Highland Railway).

Both had doors at each end and glazing all along each side. They were built as all 3rd Class carriages, but around 1910 a partition had been added to No.10 to provide a small 1st Class section.

The coaches were cut down in 1923 to fit the restricted Ffestiniog Railway loading gauge. This was done by lowering them on their bogie bolsters and cutting the sides above the windows.

Number 25 did not survive into the preservation era but a new steel underframe was delivered to Gelert's Farm Works in 2005, on which is constructed a replica of the original carriage.

The clash between the FR Co. and NWNGR numbering systems that required the renumbering of the WHR carriages back in the 1920s remains. This means that the new carriage, although built to the original NWNGR dimensions, and carrying its NWNGR number, 9, for reporting purposes it will be No. 25. This ensures, as and when, it may be operated on the main WHR line, there is no "duplicate number" problem

The new underframe was sent in April to Llangollen where all the metal components for brakes were added. The underframe was then moved to Stanegate Restorations & Replicas Ltd's workshops in Haltwhistle where the body has been assembled. It is scheduled to arrive back at Gelert's Farm Works (painted and glazed) early in 2009. A contract for assembling the bogies was given to Alan Keef Ltd for delivery early in 2010.

The replica entered service on the 18th March 2010. 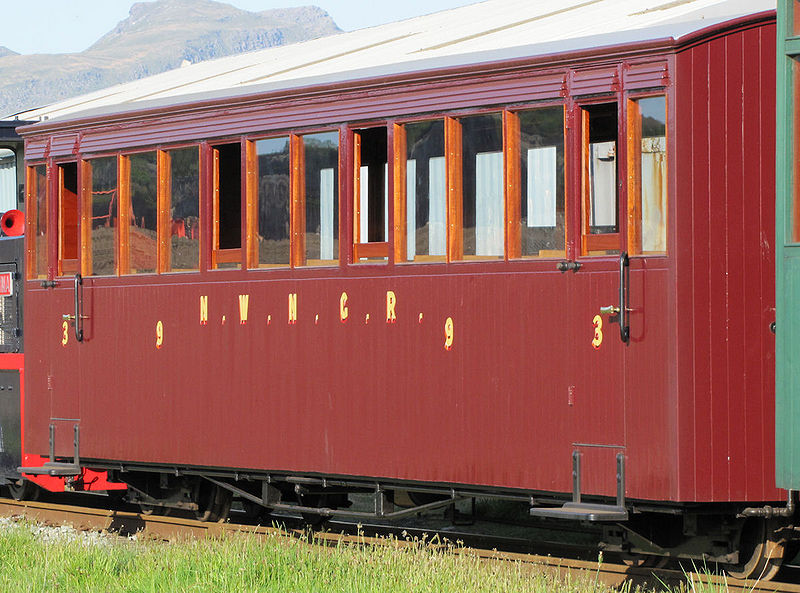