From Festipedia, hosted by the FR Heritage Group
(Redirected from Hudson Toastrack)
Jump to navigation Jump to search

In 1923 the Festiniog Railway purchased six open "Toastrack" coaches from Robert Hudson Ltd of Leeds. They were numbered 37 to 42. Although brand new, according to Boyd [1] they were identical in design to coaches supplied by Hudson to the War Department during the Great War for use on military railways, but he does not state where. The vast networks of temporary lines which served the front line in France and other theatres of war did not have purpose-built carriages, the troops generally rode in wagons or marched. A few permanent military bases in Britain had light railways with carriages.

The low price (£155 each) and short delivery (three weeks) suggest that they may have been left on the maker's hands, or that they incorporated existing parts such as underframe and bogies. The carriages had underframes identical to those of WD type D open wagons except for the vacuum brake fittings and the bogies, which though interchangeable differed in that the brakewheels were at frame level instead of the usual raised brakestaff. This design of bogie was developed for use on a variant of the F type well wagon used for field guns, which were loaded over the end of the wagon, so the usual high brakestaff would have been in the way. This type of bogie is believed to have been made by Gloucester RC&W, and G. R. Turner Ltd.

One picture (iBase 989) shows No 38 at Boston Lodge when new (but not finish-painted) with a large pole the full length of the carriage to close off the 'doorways' - this pole sits in hooks on the body side and there are additional hooks below the footboard to receive it when not in use, and it would need a man or two to move it to release the passengers. This cumbersome arrangement was not used in practice and light chains were added to close off the 'doorways' on the journey. Also curved guard rails were added to raise the effective height of the seat ends and these appear in all other pictures.

Although paid for by the FR, the Toastracks were used on both the Festiniog and the Welsh Highland Railways. These Carriages were not considered successful and four were converted to flat waggons by the end of the 1920s, although two remained in use in the mid-1930s and survived the war in a derelict condition. They were photographed above the Old Engine Shed in 1940 (iBase 997) and 1942 (iBase 996). They were later moved to Glan-y-mor (iBase 975) but in August 1955 were seen in front of the Old Engine Shed (iBase 808, 1087). The bodywork was scrapped in the early revival period but photos[2] [3] from April 1956 show them retaining the seat-ends from two of the intermediate seats (complete with curved guard-rails) and in use for carrying sleepers.

The surviving underframes have been used for wagons (see Bogie Coal Wagons 64-67) and/or the resurrected Toastracks described below.

The Ffestiniog Railway nowadays has three carriages with open sides. These are added to service trains in good weather, to offer passengers an alternative to travelling in an enclosed carriage. As flexible additions to existing carriage sets, these open coaches almost invariably run immediately behind the locomotive (on an up train). Often known as the "Tourist Cars", two of these carriages were built in 1971 at Boston Lodge. They utilise WD type D underframes, but the bodies, though in the spirit of the originals, are more substantial. The third was built in 1992 and is a more exact replica of the original Hudson design.

Two other FR toastracks have been rebuilt at other railways with new bodywork on original underframes.

More details of each of the individual carriages existing today are given below. 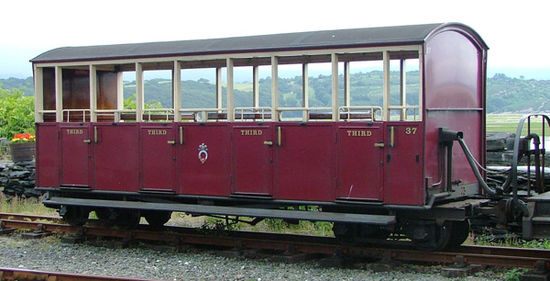 Carriage 37 in in 6 road siding at Harbour 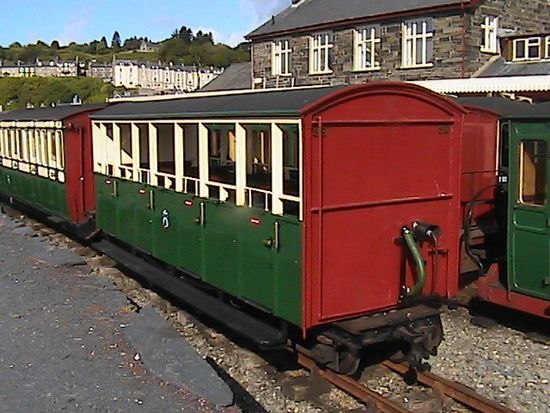 Carriage 38 in in 6 road siding at Harbour

The current Carriage 38 was built using the parts from the original Carriage 37 (later Wagon 66) in 1971. While Carriage 37 retains the standard livery of maroon and cream, carriage 38 has been repainted in green and ivory livery. 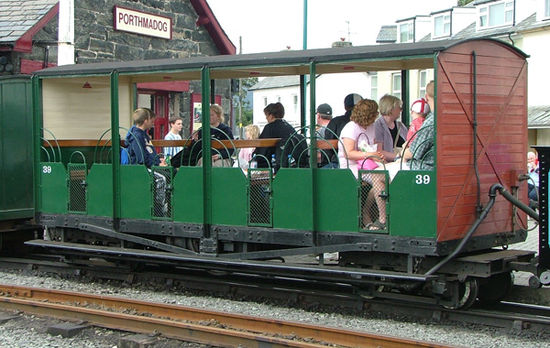 Carriage 39 is essentially a replica of one of the original Hudson carriages and was built on an old WD frame by Winson Engineering at Penrhyndeudraeth using some original parts from Wagon 73, and upgraded at Boston Lodge in 1992. It is painted in the "Colonel Stephens" Livery of green with red ends. Wire mesh doors were added for safety reasons, in place of the original chains, in 2004.

One of the Toastrack underframes (it is not clear which one) became FR wagon 67 and in recent years this was passed to the Moseley Railway Trust, who have now rebuilt it as WHR Carriage 40 and operate it on their Apedale Valley Railway in Staffordshire. 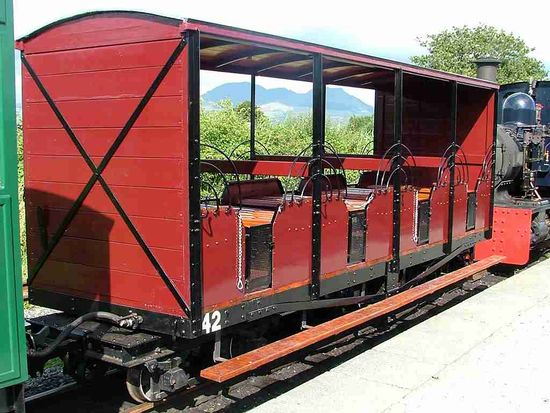 Side view of 42 shows that the detail of the side quadrants follow that of Carriage 47, unlike Carriage 39. Chains and doors are fitted. The doors do not have the curved detail of 39.

There is another example of this type of vehicle, Carriage 42, to be found on the Welsh Highland Heritage Railway. Uses the original frame from 42, later Wagon 64.

A derelict Hudson Toastrack - identified as Carriage 47 - was one of two parked outside the old Locomotive Shed at Boston Lodge at the time of restoration in 1955. Referring to Boyd[4] pages 361/2, only the original 37 and 42 were not converted into flat wagons, therefore there is a probability that the true identity is one of these. There is no other record of a carriage of this number.

The only connection this vehicle has to this block is that it was built using a Hudson open wagon chassis in 1980 at the Gelert's Farm Works. Due to its construction, it was sometimes referred to as a toastrack. It was subsequently converted to a disabled coach in 2005, and acquired the nickname “old toastie” when No 42 was rebuilt. It has now been sold elsewhere.